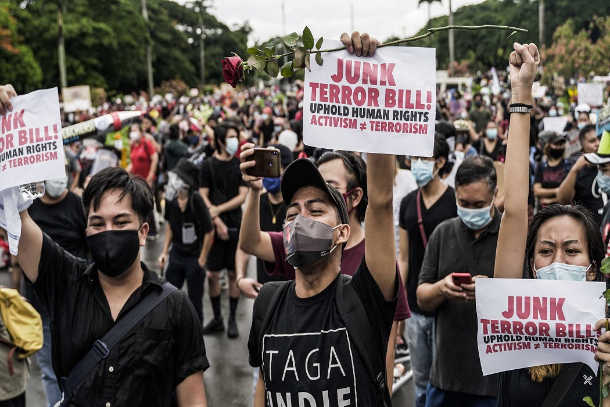 Protesters wearing face masks carry anti-terror bill placards as they march at a university campus in Manila on June 12 at an Independence Day rally. (Photo by Miggy Hilario/AFP)

Catholic bishops in the Philippines have issued an Independence Day rallying cry calling on Filipinos to unite and fight for freedom against the “anti-people” policies of President Rodrigo Duterte’s government.

People's quest for freedom and liberty should never end even if curtailed by a government due to pandemic restrictions, Manila’s apostolic administrator Bishop Broderick Pabillo said on June 11.

The Philippines celebrates its Independence Day on June 12, commemorating the end of 333 years of Spanish rule in 1898. The Spanish introduced Catholicism to the entire archipelago.

“We celebrate Independence Day with the hope that true independence will come upon us, if now, we defend our freedom,” Bishop Pabillo said in a statement.

The prelate has also said that while Filipinos fight against the coronavirus, they should also fight against policies that further oppress people.

These include a recent anti-terrorism bill passed by lawmakers that has sparked widespread opposition due to provisions that many see as oppressive and unconstitutional.

Justice Secretary Menardo Guevarra also announced on June 10 that protests are considered mass gatherings and were banned for health reasons.

“I want to remind the public that violations [of quarantine protocols] may give rise to penal sanctions under existing public health laws, not under criminal laws,” he said on national television.

Guevarra issued the warning ahead of expected mass Independence Day demonstrations to demand that Duterte veto the anti-terrorism bill.

Duterte’s opponents say the bill is a weapon to silence critics by branding them “terrorists” and throwing them in jail without court warrants.

The Justice Department’s warning came after church and human rights groups staged recent protests against the bill in Manila and Cebu City.

Five protesters were arrested by police on June 5 for violating quarantine protocols at the University of the Philippines-Cebu, Visayas campus.

The police made the arrests despite a law banning police and the military from entering university campuses without prior permission.

The university student council condemned the arrests as “militaristic,” saying they were made to silence Duterte critics under the guise of health reasons.

“This clearly manifests how the systemic targeting of critical voices is prevalent everywhere. When those in power are not even held accountable, students echoing public sentiments are now silenced,” said the university student council in a statement.

Police officers, however, said they did not violate any law as they were in “hot pursuit,” which justified their entry to the campus.

Commenting on the arrests prior to Independence Day, Bishop Gerardo Alminaza of San Carlos called on Filipinos to protect freedom for future generations.

“In today’s context, I invite all to seriously consider how best to express our love for our country and honor the precious memory of those who offered their lives for our freedom,” the told reporters.

Bishop Alminaza said that the coronavirus would not stop the Philippines marking Independence Day, especially regarding the fight against corruption and evil in society.

“I ask every Filipino to read well the signs of the times and make their voices heard on the various platforms available,” he told UCA News.