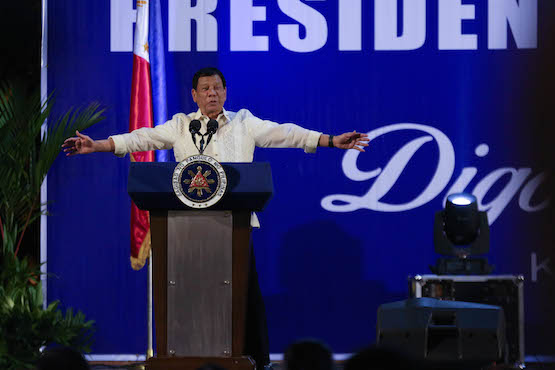 Philippine President Rodrigo Duterte gestures as he delivers a speech at the presidential palace in Manila on March 31. (Photo by Albert Alcain)

In a speech on March 30, Duterte renewed attacks against the Catholic Church, which has been vocal in its criticism against the president's anti-narcotics war, his plan to re-impose the death penalty and lower the age of criminal liability.

Duterte said Catholicism "will become passe in the next 30 years" because of alleged abused of priests and bishops.

The bishops dismissed Duterte's tirade, saying that, "attacks from outside never weaken but further strengthen the church."

Bishop Pablo Virgilio David of Kalookan said Duterte would not succeed if he intends to bring down the church.

"A lot of people said the same thing many centuries ago. Some even tried to destroy the Catholic Church," said the prelate.

"It appears that not even the sins and weaknesses of its own members could destroy the church," said Bishop David, adding that the church "seems to be even more effective as a minority."

The prelate said the church remains not because of priests and bishops. "Only Jesus Christ keeps the church alive," said Bishop David.

"A million Dutertes will never succeed in harming [the church]," said Bishop Bastes. The Philippine president and the bishops "Everything will be passe but the church will give way only to the dawning of God's Kingdom, whose image on earth is the Catholic Church," said the prelate.

Retired Archbishop Oscar Cruz of Lingayen-Dagupan, said there are priests and bishops who have committed mistakes but it did not lead to the downfall of the church.

"One thing is very certain, while the churchmen may be sinful, the church per se, being founded by Christ, is one: holy, catholic, apostolic," said the former head of the bishops' conference.

Archbishop Cruz said church leaders will continue to be critical of what is happening in the country "because it is duty bound to preach the Gospel."