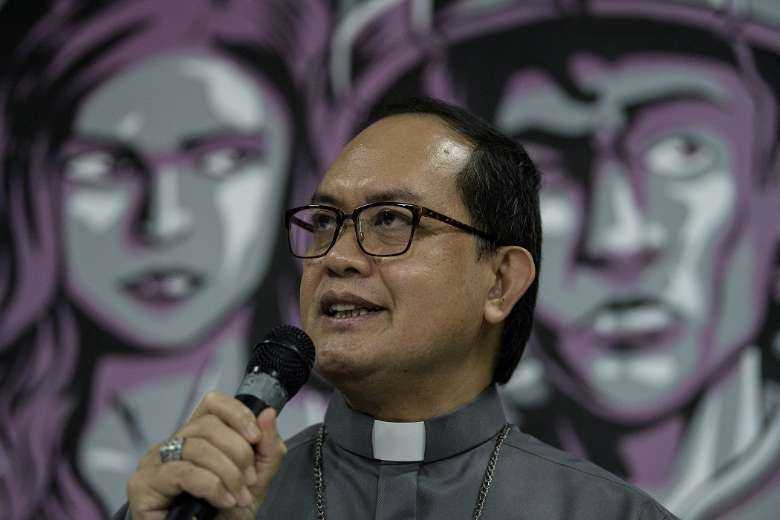 Bishop Pablo Virgilio David answers questions during a press conference at the Commission of Human Rights headquarters in Manila on Sept. 14, 2017. (Photo: AFP)

A senior church official in the Philippines has urged Catholics to arm themselves with facts to fight those who spread fake news and disinformation ahead of the May elections.

The real election battle for politicians is on social media rather than on the traditional soapbox, according to Catholic Bishops’ Conference of the Philippines (CBCP) president Bishop Pablo Virgilio David of Kalookan.

“Social media has become the new platform for elections. Because of the pandemic, everyone has learned how to engage on social media. It has become the source of news, also of fake news and disinformation,” he told Facts First, a group of activists fighting lies and fake news in cyberspace.

The bishop was addressing the group during a talk called "A Call to Action in Manila" on Jan. 26.

Bishop David lamented how some politicians weaponized the internet by spreading fake news and disinformation to secure votes.

“There is a lot of fake news on social media, so we must address all these falsehoods because it is an urgent concern of all citizens and those who advocate the truth,” he said.

Every Catholic, who is supposed to be an advocate of truth, must join the fight against such disinformation, he said.

Bishop David recently condemned claims by supporters of the late dictator Ferdinand Marcos Sr. and his son now running for president, Ferdinand “Bongbong” Marcos Jr., that the imposition of martial law during the former’s rule was a “golden era” in Philippine history.

Recent posts praised the Marcos family for various achievements such as building the country’s biggest hospitals.

“We cannot afford to keep quiet when candidates claim the best government we’ve ever had was the Marcos dictatorship,” said Bishop David.

The CBCP president assured people that the Church would always be for the promotion of the truth as it was every Christian’s duty to promote it.

“In fighting for the truth, you can count on us as your allies. I am confident that … we will boost the objectives of fact-checking groups by sharing the fruits of their work,” he told the activists.