Archbishop Socrates Villegas, president of the bishops' conference, said "one Filipino victim of human trafficking alone is one victim too many for us as a Christian nation".

In a pastoral letter issued on Monday, Villegas said the "evil of human trafficking" is so pervasive and the perpetrators so determined that utmost cooperation is needed among the Church and the government.

"This infamous network of crime is now well established in our cities, and many people have blood on their hands as a result of their comfortable and silent complicity," the prelate said.

"Seeing how evil has spread and threatens to scatter the flock, we can only cry with the Good Shepherd, This cannot go on! It must stop," Villegas said.

The 2014 edition of the Global Slavery Index, released by the Australian group Walk Free Foundation, ranked the Philippines among countries "making comparatively strong efforts with limited resources" in the campaign against human trafficking.

The Index, which was released last month, ranked the Philippines as first in Asia, number three in the Asia-Pacific region, and number 29 globally, out of 167 countries, in terms of the government’s efforts and programs against human trafficking.

Pabillo said traffickers pretend to be benefactors, offer housing and jobs to typhoon victims. "Some survivors resort to criminal deeds," the bishop said. 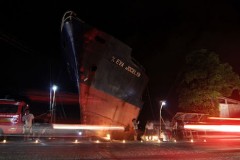 Reliving the tragedy of Haiyan