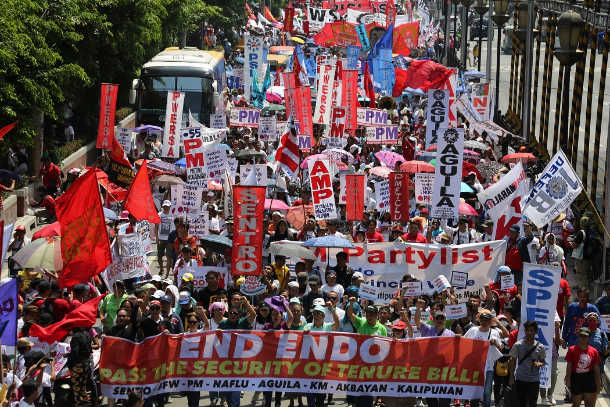 Thousands of workers march in the Philippine capital Manila to mark Labor Day on May 1. (Photo by Jire Carreon)

As thousands of Filipinos marched in the streets of Manila in Labor Day protests on May 1, several Catholic bishops lent their voices to calls for decent jobs and employment security for workers.

The bishops said ensuring job security for workers is one of the best gifts the Philippines government can give to its people.

"First, create jobs so that [people] will never be forced to find work in foreign lands and be separated from their families," said Bishop Ruperto Santos, head of the Episcopal Commission on Migrants and Itinerant People.

The prelate of Balanga Diocese said an end to "labor-only contracting" or "contractualization" of labor will also provide stability for workers.

"Labor-only contracting" is the practice of using agents or manpower agencies to recruit casual workers on behalf of a bigger business.

It circumvents labor rules that apply to regular employees, consequently making it easier to sack workers.

In a statement, the ecumenical group, Church People-Workers Solidarity said the government's "lack of political will" to end "contractualization" has allowed the exploitation of workers.

Data from the independent think-tank Ibon Foundation showed that 90 percent of the Filipino workforce is "contractual."

Manila Auxiliary Bishop Broderick Pabillo said the situation for workers in the Philippines runs against church principles regarding social justice.

"The workers have long been demanding security of tenure," said the prelate.

In his Labor Day message, President Rodrigo Duterte called on legislators to pass laws to protect workers' rights and ensure security of tenure.

He said he remained optimistic that Congress would “consider passing much needed legislative measures" to protect workers' rights.

Duterte, however, said banning all forms of "contractualization" was not within his power but was up to Congress because only the legislature can amend the country's 45-year-old Labor Code.

In September 2018, he declared as urgent a Security of Tenure bill which seeks to ban the hiring of workers on fixed-term.

In his message, the president lauded overseas Filipino workers who leave their families to earn a decent living abroad.

He also recognized the contribution of workers to development "not as a tool of employers and capitalists, but as an essential catalyst for our nation's progress."

The Global Workers’ Rights Index, a report from the International Trade Union Confederation in 2018, noted that the Philippines is among the 10 worst countries in terms of repressing workers' rights.

The Center for Trade Union and Human Rights documented about 16,000 workers whose rights were violated as regards to freedom of association and collective bargaining in the past two years.