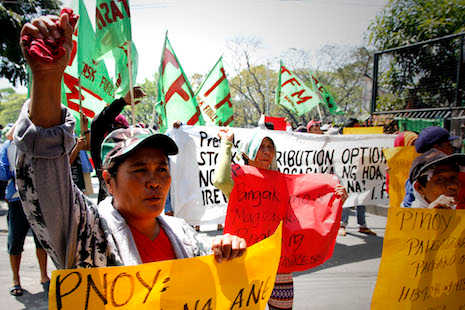 Farmers hold a protest rally outside the Department of Agrarian Reform office in Manila on Tuesday to call for the immediate distribution of land. (Photo by Joe Torres)

Landless farmers launched protest rallies on Tuesday, a day after President Benigno Aquino dismissed an appeal made by 81 Catholic bishops to continue the distribution of land under the government's agrarian reform program.

On Sunday, 81 Catholic bishops issued an appeal to the president not to "allow the agrarian reform program to die a quiet death before its noble mission to finally emancipate and liberate our farmers is fully achieved".

In the letter of appeal, which was drafted during the visit of Pope Francis in January, the bishops said that ignoring the plight of people who depend on agriculture is tantamount to "disenfranchising at least a million farmers of their right to own the land they till … and find a path out of poverty".

The presidential palace, however, dismissed the bishops' appeal saying that the Church leaders should instead pressure Congress for the passage of proposed laws that will ensure the immediate distribution of land.

He said the president has already "shown intent" and has undertaken "immediate action" on the bills being backed by the bishops.

But protesters on Tuesday said they held the president personally responsible following assurances that land would be distributed.

Vargas, who hails from La Castellana town in Negros Occidental province, was among at least a hundred farmers from the central Philippines personally promised by Aquino, during a meeting in 2012, to receive land from the government.

However, three years later Vargas remains landless. The government was only able to distribute five hectares out of a 126-hectare landholding in the province to 16 farmers, or just about 3,000 square meters per farmer.

The government's Comprehensive Agrarian Reform Program, which expired last year, mandated that each farmer be awarded up to three hectares of agricultural landholding.

In spite of laws ordering distribution of large land-holdings, data from the agrarian reform office show that as of August 2014 some 708,000 hectares have yet to be distributed to farmers who are beneficiaries of the government's land reform program.

In June 2014, Aquino certified as urgent the passage of two proposed laws, but the House of Representatives, which is dominated by Aquino's Liberal Party, has not yet passed the measures.

Following several revisions, the bishops have appealed to Aquino to again “certify as urgent" two proposed laws that will provide adequate funding for support services to agricultural landholdings that have not yet been placed under the program.

The bishops also want to pass another law that will create an independent agrarian reform commission to review the actual accomplishment of the government's land reform program and investigate violations of the law.

Alberto Jayme, president of the national peasant federation Task Force Mapalad, said the president should listen to the bishops and defend the farmers "amid the stubbornness and apparent greed of some [legislators]".

Jayme said "it's both puzzling and disturbing" why Congress did not act on the proposed legislation.

However, representative Walden Bello of Akbayan Party revealed on Tuesday that a powerful group of wealthy landholding legislators from the central Philippines region of Visayas is blocking the two bills that would extend the agrarian reform program.

"The House leadership still hesitates to bring [the proposed law] to plenary discussion," said Bello. He said congressional leaders do not want to provoke a group of rich legislators from the central Philippines.

Jayme said that on February 24 he and a group of farmer representatives had tried to meet with House Majority Leader Neptali Gonzales II.

"But instead of him having a dialog with us, security men pushed and dragged us out of Congress like criminals," said Jayme.

"Gonzales is… killing the CARP bill…. [He] appears to be opposing the stand of his party-mates and party bosses. It may be good to ask whether Gonzales is a member of another party and the leader of another majority whose platform opposes social justice and poverty alleviation through agrarian reform,” said Jayme.