Philippine bishops appeal for end to attacks on captive priest

After being the hostage of terrorists, Father Teresito Soganub now endures unfound rumors Father Teresito Soganub faces the media in Manila following his release from the hands of terrorist gunmen on Sept. 17. (Photo by Mark Saludes)

Catholic bishops in the Philippines appealed for an end to "unfounded attacks" against a priest who was freed last month from the hands of terrorist gunmen who occupied the southern city of Marawi.

Bishop Edwin dela Pena of Marawi, said captive Father Teresito Soganub has been through difficult times and unfounded accusations against him are not helping his recovery.

"I appeal to all of you, please stop attacking him. Your allegations are baseless and he is hurt by what you have been saying," said the prelate in an interview.

Father Soganub has been the target of attacks on social media after rumors circulated that he converted to Islam while he was in the hands of the Islamic State-inspired Maute Group gunmen, the leaders of which have just been reportedly killed.

The priest denied the allegations and was even seen celebrating Mass on Sept. 24, after 115 days in captivity. He escaped from his captors amid heavy fighting on Sept. 17 and was later rescued by government forces.

Bishop Dela Pena said he met with the priest at a military headquarters in Manila, but refused to provide details of the meeting, which he described as "very heartbreaking."

Father Soganub remains in the hands of the military as he continues to undergo psycho-social examination and "custodial debriefing" to determine his state of health.

"Being a friend of Muslims doesn't make one a Muslim. Being caring, not just to fellow Christians but to non-Christians as well, is a truly Christian thing to do," said Bishop David. 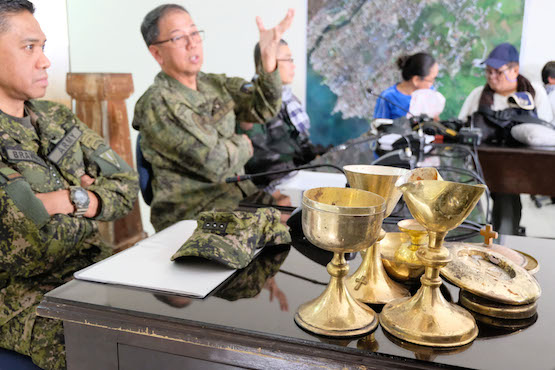 Bishop Dela Pena, meanwhile, said the reported death of leaders of the Maute Group signals the "beginning of the end" of the shooting war that brought havoc to Marawi for almost five months.

The Marawi prelate said the end to the conflict is in sight following the news of the "crumbling leadership" of the terrorist group.

On Oct. 16, Philippine Defense Secretary Delfin Lorenzana announced that the top leaders the Maute Group were killed in clashes with government troops past midnight.

Military operations will, however, continue despite the death of the terrorist leaders to flush out remaining fighters. Martial law, which was declared on May 23, will continue to be in place across the southern Philippines region of Mindanao.

President Rodrigo Duterte declared martial across the region following the attack on Marawi that resulted in the displacement of close to 400,000 people.

Last month, Bishop Dela Pena appealed to the president to allow some of the displaced families to return home, particularly those living in secured, government-controlled areas away from the main battle ground.