A victim of the Philippine drug war lies dead in an alley in the Manila suburb of Navotas in this file photo. (Photo: Vincent Go)

A leading churchman in the Philippines has backed a report issued by the chief prosecutor of the International Criminal Court (ICC) which said that there was reason to believe President Rodrigo Duterte had committed crimes against humanity with his campaign against illegal drugs.

Retired Sorsogon Bishop Arturo Bastes went as far as saying there was strong evidence that Duterte was guilty of such crimes.

The report of top ICC prosecutor Fatou Bensouda said there was “reasonable basis” to believe that Duterte committed crimes against humanity in killing drug suspects by allegedly using police officers without due process of law.

“The Office [ICC] is satisfied that information available provides a reasonable basis to believe that the crimes against humanity of murder … torture … and the infliction of serious physical injury and mental harm as other inhumane acts … were committed on the territory of the Philippines between at least 1 July 2016 and 16 March 2019 ...,” Bensouda said in her report released on Dec. 14.

Bishop Bastes said the figures cited in the ICC report were a valid representation of Duterte’s crimes.

“There are human rights violations by the Duterte government. I approve of the ICC’s action against Duterte. I hope concrete sanctions will be slapped against him,” the prelate told UCA News.

When asked if Duterte had a hand in the killing of drug suspects, Bishop Bastes said the perpetrators would not roam around Manila’s streets without Duterte’s blessing.

“I really think he has a hand in all these killings. He had been murdering people even as mayor in Davao simply by suspecting that they were drug addicts or pushers,” he said.

The bishop expressed hope that justice would be served to the poor victims of extrajudicial killings in the Philippines.

According to government figures, just over 8,000 people have been killed since 2016 when the drug war began. However, estimates from rights groups, activists and Bishop Bastes himself put the number of dead up to three times higher. 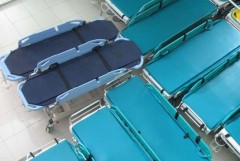 “There have been more than 20,000 victims of extrajudicial killings since the Duterte administration launched its campaign against illegal drugs. The number is even higher than Covid-related deaths in the Philippines and it continues to rise,” the bishop said.