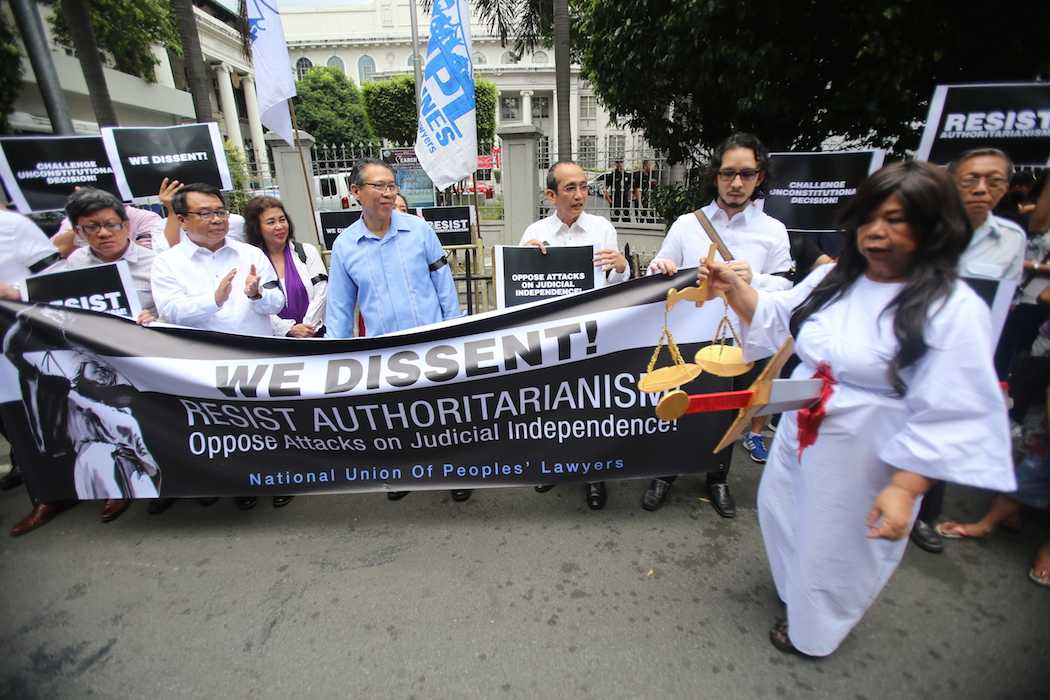 Members of the National Union of Peoples' Lawyers protest against the Philippine Supreme Court move to oust the chief justice at a rally in Manila on May 15. (Photo by Daniel Perez)

A Filipino bishop has warned Philippine President Rodrigo Duterte that he could be next following the ouster of Maria Lourdes Sereno, the country's chief justice.

"The Supreme Court fell.... It self-destructed by granting the quo warranto. It fell from being a bastion of independence in our democratic system," said Bishop Pabillo.

Eight of the court's 15 justices voted in favor of granting a quo warranto petition to remove Sereno from office.

A quo warranto is a special legal action to resolve a dispute over whether a person has the right to hold a public office he or she occupies.

Sereno's supposed failure to declare her assets and liabilities before she was named head of the judiciary in 2012 was cited as the reason for initiating the proceedings.

"[The Supreme Court] lost the esteem and even the respect of the people. It has shown its true and unmistakable colors of being a tool of Duterte," said Bishop Pabillo.

The prelate said the Supreme Court decision has enraged the people who now openly express the call for the president to resign.

"The fight now moves from the Supreme Court to [the presidential palace] because people clearly see the dictatorial moves of the Duterte regime," said the prelate.

On May 15, lawyers, law students, and various organizations of lawyers marched to the Supreme Court building in Manila to express their opposition to what they described was "continuing attacks against judicial independence."

"The legal community has spoken. We express our strongest opposition against the ouster of the chief justice," said lawyer Ephraim Cortez, secretary-general of the National Union of Peoples' Lawyers (NUPL).

Cortez described the court decision as "legally erroneous and unconstitutional" and has "practically decapitated the judiciary and sent a chilling effect."

"The decision has laid the predicate for authoritarianism as it completes concentration of power in the executive," said the lawyer, warning that attacks against judicial independence "place our democracy in peril."

NUPL president, Edre Olalia, said the decision would have a "damaging effect on the independence of a supposed co-equal branch of government as the final authoritative arbiter of many legal issues."

"This bodes ill for people's issues that need judicial protection and promotion," Olalia said, adding that the decision to oust the chief justice "sets a dangerous precedent as the removal from office of constitutional public officers can be short-circuited through a disingenuous legal trick."

Bishop Emeritus Teodoro Bacani of Novaliches, one of authors of the country's 1987 constitution, said Sereno's ouster has "weakened" the Supreme Court, which the prelate described as the "chief protector of our democracy."

"I am very sorry for what happened," said the bishop.

Archbishop Martin Jumoad of Ozamis appealed to the people "to stay calm" and not to resort to violence.

Bishop Pabillo warned of more protests in the coming days. "Expect more unmasking of the hypocrisy of Duterte and his cohorts," said the prelate.

In the last few months, Duterte had been vocal in calling for Sereno's ouster after she was critical of the president's crackdown on alleged drug addicts, dealers and their protectors without due process.