Dry spell to hit those in the countryside especially hard, Manila prelate says 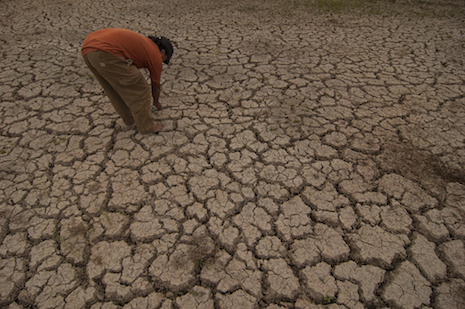 A farmer checks a field hit by the El Nino phenomenon in a northern part of the Philippines. (Photo by Rob Reyes)

The auxiliary bishop of Manila has warned that ordinary Filipinos will bear the brunt of an intense dry spell in the coming months as the El Nino phenomenon continues to intensify in many parts of the country.

Bishop Broderick Pabillo of Manila has called on the government to explain what it intends to do to help mitigate the effects of a prolonged drought that is expected to hit the country.

"This will not only result in job losses but will also lead to hunger, especially in the countryside," he said Oct. 6.

El Nino is a climate cycle in the tropical Pacific Ocean caused by warm water. The warm water pools, which causes the dry spell, usually from near Indonesia and the Philippines.

The country's weather bureau has reported that 58 percent of the Philippines is already experiencing the effects of El Nino. The figure is expected to rise to 85 percent in February 2016.

The Trade Union Congress of the Philippines warned this week that up to 1 million Filipino workers in the agricultural sector stand to lose their jobs in the next six months because of the dry spell.

In July, the National Economic Development Authority blamed the onset of El Nino for a rise in unemployment. The agency said some 755,000 workers have already lost their jobs.

"I don't know where they got that number, but many would really be affected by this, especially those in the countryside," said Bishop Pabillo.

The prelate said that in 1997, when an El Nino hit the country, some people, who were reduced to eating root crops, died.

The state weather bureau, Pagasa, believes the current dry spell will surpass the effects an El Nino had in 1997. It warned the dry spell could be one of the worst droughts since 1950.

Bishop Pabillo expressed hope that the Philippine government has a mitigation plan to address the impending disaster.

"Our question now to the government is, 'What is their plan?'" the bishop said.

"[The government] has the means and the technology, that's why we are asking them about their plan. If [the government] needs the support of the church, then we will help," Bishop Pabillo said.

"I don't know what they can do ... but maybe distributing extra food or rice rationing is one thing ... Maybe people can be given seeds to plant when the rain comes again," he added.

The government has announced that the country will likely import more rice.

He said all government agencies are working to deal with the weather phenomenon's impacts on food, prices, energy and the welfare of farmers and poor consumers.

The country's Department of Agriculture noted that as of May this year, damage to crops caused by the El Nino has already reached US$49.13 million.

Environmental group Greenpeace has called on the Philippine government to adopt and support policies and programs to help convert the country's farming system toward a climate-resilient model.

Wilhelmina Pelegrina, a Greenpeace food and agriculture campaigner, said farms and families in the southern Mindanao region are already suffering due to the dry spell.

"Harvests have been reduced or lost, and families are going hungry, reinforcing the urgent need to shift our country's agriculture system to a more climate-resilient model," said Peligrina in a statement.