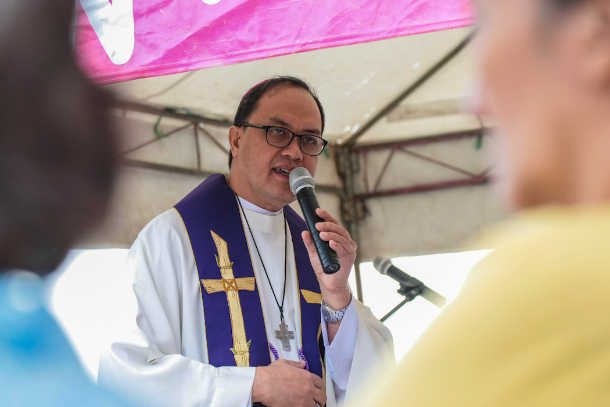 Bishop Pablo Virgilio David of Kalookan issues a statement condemning those who support and tolerate the spate of drug-related killings in the Philippines. (Photo by Jire Carreon)

A Catholic bishop in Philippine capital Manila has warned supporters of the government's war against illegal drugs, and those who refuse to speak against it, that their names will be written on the walls of Hell.

In his "prophetic oracle against murderers," Bishop Pablo Virgilio David of Kalookan said "the cries of the bereaved families of victims have been heard on the throne of Mercy."

The prelate read his statement during a Mass on Aug. 17 to mark the first anniversary of the death of Kian delos Santos, a 17-year-old boy who was accused of being a drug courier and killed by policemen.

"You have been weighed and have been found wanting, therefore your names will be written on the walls of the deepest recesses of the underworld," said Bishop David.

"Woe to you who claim to be waging a war against illegal drugs but are killing its victims instead of saving them."

He lambasted those "who order law enforcers to murder when their mandate is to protect citizens and defend their right to a safe and secure environment."

Also included in the bishop's condemnation were village leaders, funeral handlers and boatmen who supposedly connive with "serial-killing death squads."

To those who label drug addicts as "non-humans" deserving of death, Bishop David said: "Who gave you the right to pass judgment on people who are sick? You claim to care about the future of young people in this country. What future awaits them if they end up dead on a street alley after a 'legitimate’ police operation?"

To those who "just stand by and watch while the masked killers kill their targets in broad daylight," the bishop asked: "How long has it been since your consciences died?"

The Philippine National Police have reported that 23,518 murder cases have been investigated since July 2016, when President Rodrigo Duterte came to power, to June 2018.

At least 4,300 involved drug suspects, including Delos Santos who was shot dead on Aug. 16, 2017, killed during "legitimate police operations" as of May 15.

The boy, a student at Catholic school, was alleged by police to be a drug courier for his father and uncle. He was shot for allegedly resisting arrest.

Video footage and statements by witnesses, however, revealed that up to three policemen were seen dragging a man matching the description of Delos Santos to an alley where he was later found dead.

Bishop David said the boy will "never be forgotten ... until justice is achieved."

The prelate unveiled a memorial marker in the diocese on Aug. 18 to remember Delos Santos and the spate of drug-related killings.