Sporadic clashes between Philippine security forces continue in the southern city of Marawi as gunmen claiming to be Islamic militants hold on some parts of the city. (Photo by Mark Navales)

The Bishop of Marawi in the southern Philippines has condemned the desecration of the city's cathedral that was shown on a video that surfaced on social media this week.

"We are angered by what happened. Our faith has really been trampled on," said Bishop Edwin de la Pena of Marawi after watching the video, which lasted about one minute and 45 seconds.

The video, believed filmed on May 23 before the burning of the cathedral, shows gunmen smashing and stomping on religious images and a big wooden cross.

The gunmen shouted "God is great!" while burning pages of the Bible, photographs of Pope Francis and Pope Benedict XVI, the bishop's chair, the ambo, the tabernacle, and other religious items.

He admitted that prior to the attack on Marawi, there was already information that the local terrorist Maute group had been planning to "destroy and burn the church."

"But we didn’t take it seriously because for us it was unthinkable that it was going to happen in Marawi," said Bishop De la Pena.

The prelate said Catholics in Marawi are in "mourning."

On June 6, sporadic clashes continued against gunmen who claim to be Islamic militants in Marawi city as the fighting entered its second week. 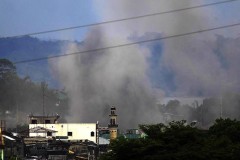 More than 200,000 people, most of whom are Muslims, have been displaced by the fighting.

President Rodrigo Duterte has already offered a US$200,000 million bounty for the "neutralization" of the leader of the terrorist group.

The bounty is on top of the US$150,000 offered by the Philippine government and the US$5 million offered by the US government for information that would lead to the arrest or killing of Isnilon Hapilon, reportedly the emir of the Islamic State in Mindanao.