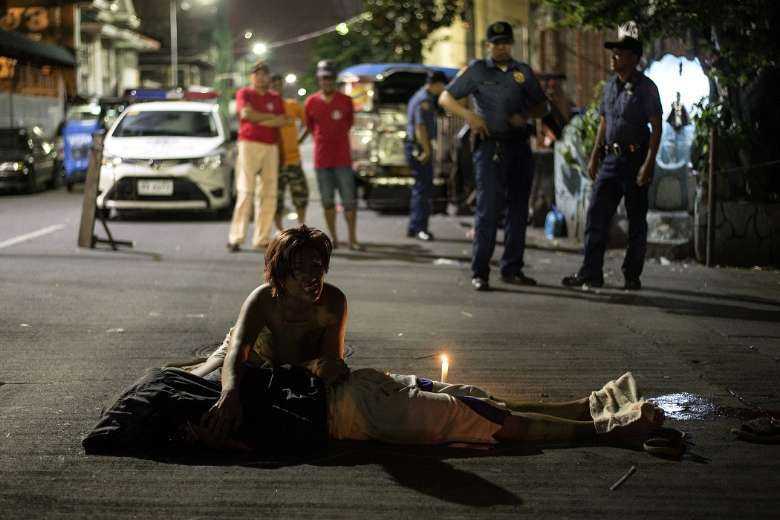 A woman grieves beside the body of her son, an alleged drug user killed by unidentified assailants, in Manila on Oct. 3, 2017. (Photo: AFP)

Philippine President Rodrigo Duterte should not shun an International Criminal Court (ICC) investigation if he is innocent of instigating thousands of killings in his drug war, a Catholic bishop says.

He was speaking on June 16 after Duterte’s spokesman Harry Roque said the president would not cooperate with any ICC probe in response to its chief prosecutor this week calling for a full investigation into the killings.

“If they [Duterte and high-ranking police officers] didn’t do anything wrong, why not allow themselves to be investigated? Why won’t they participate?,” Bishop Pabillo said.

Bensouda, who steps down as chief prosecutor this week. said there was a “reasonable basis” to believe that Duterte had committed crimes against humanity through the “widespread” and “systematic” mass killing of alleged drug suspects while mayor of Davao City in the Mindanao region. Her call came after a preliminary probe was launched into the killings in 2018.

This is an insult to all Filipinos for foreigners to tell us that our legal institutions ... are not working to give justice and order

Up to 30,000 people are thought by rights groups to have been killed in the drug war so far.

“Was it not politics the reason why the case was filed? This is now a political issue. The president will never cooperate until his term ends on June 30, 2022,” Roque told a press briefing on June 16.

He also insisted that a formal investigation would be “legally erroneous” as it would question the judicial independence of Philippine courts and their ability to launch a similar investigation.

The ICC can only initiate an investigation legally if there are no domestic courts or institutions in place in a member state, he said.

“This is an insult to all Filipinos for foreigners to tell us that our legal institutions here in the Philippines are not working to give justice and order,” Roque added

Bishop Pabillo, however, said every step to end a "culture of impunity" in the Philippines must be welcomed by all Catholics.

“In a way, it’s a welcome development because if there are no crimes committed, then an investigation will show that. The Catholic Church has long been calling for transparency with regard to how many lives the anti-drug campaign has claimed,” he added.

Why would he [Duterte] not participate in the process? Is he hiding something?

“Why would he [Duterte] not participate in the process? Is he hiding something? As far as I know, if someone is innocent, he should be willing … to prove he is clean and innocent,” said one priest from Baguio Archdiocese who wished to remain anonymous.

“This brings hope not only to those who oppose the war on drugs but most importantly to the families whose members became victims of the killings,” Joel Carbonel from the Knights of Columbus in Legaspi Diocese posted on social media.