Philippine authorities search for missing in wake of typhoon 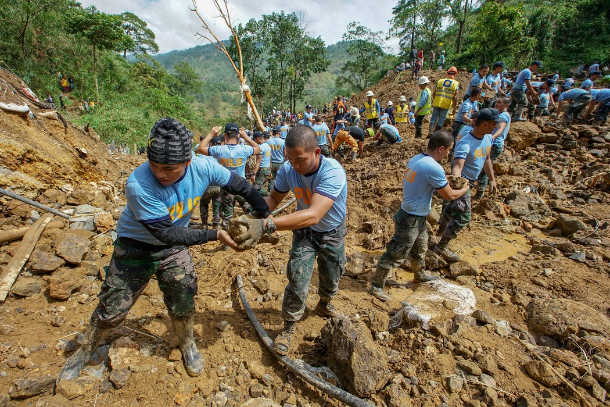 Authorities clear a collapsed mine site in the northern Philippine town of Itogon where at least 43 people were reported missing. (Photo by Jire Carreon)

At least 65 people were reported killed while 43 others remained missing in the wake of Typhoon Mangkhut that hit the northern part of the Philippines on Sept. 15.

Most of the fatalities came from the northern Cordillera Administrative Region where the search for missing people trapped in an abandoned mine continued on Sept. 17.

About 300 police officers, firemen, and volunteers shoveled mud and debris, sometimes with their bare hands, in the village of Ucab, Itogon town, in search of survivors.

The mine site has been abandoned since 2009 after the government ordered a ban on all mining activities in the town.

In a radio interview, Itogon town mayor Victorio Palangdan said a bunker, where the people sought shelter from typhoon Mangkhut, was buried by a landslide, trapping about 50 people.

He said that more than half of his town has been a mining area for over 100 years already. "This is the result of it. The mountain is coming down because there is nothing inside," he said.

"We would like to protect our environment .... We are asking that no more mining should be done in this town," said Palangdan.

The presidential palace assured that the government will not stop until all the missing will be accounted for.

"The search and rescue efforts continue .... We will not stop until everybody is accounted for," said presidential spokesman Harry Roque.

"I officially order cease and desist of all illegal small scale mining operations in the whole of Cordillera Administrative Region. By virtue of what happened, I am revoking those permits, effective today," he said in a media briefing.

He said the environment department will also be sending soldiers and policemen to effect the mandatory relocation of all individuals in areas classified hazardous.

The National Disaster Risk Reduction and Management Council reported that at least 591,762 individuals in 2,738 villages, 433 cities and towns, and 31 provinces were affected by the typhoon.