Among those arrested in General Santos City are women development workers of the Philippine Independent Church. (Photo courtesy of Karapatan)

Several church workers and rights activists were arrested in a joint police and military operation in the southern Philippine city of General Santos on July 4.

"Police claimed the people they were looking for were inside the building," said Bishop Felixberto Calang of the Philippine Independent Church.

The Protestant bishop heads the non-government Visayas-Mindanao Regional Office for Development (VIMROD) that was holding a meeting at the center at the time.

VIMROD is a development program of the Philippine Independent Church in poor rural communities and tribal areas in the Visayas and Mindanao regions.

"They accused our staff and volunteers of aiding the people named in the warrant," said Bishop Calang, who said there was nobody called Madria and Unabia among his staff.

"Those names are not known to the participants of the program," said the prelate.

Police spokesman Aldrin Gonzales, however, said two of the 13 people arrested were "positively the subjects of the arrest warrant."

"The 11 others were arrested for concealing the identities of the two suspects and resisting the arrest team," he said.

Among those arrested and charged with obstruction of justice were Aldeem Yanez of the Philippine Independent Church; church worker Roger Plana; Rosemarie Cantano, who works at the center; the security guard; and nine human rights activists. 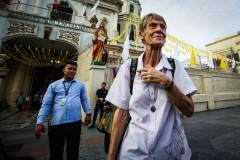 "We are still helping them to secure all necessary documents and requirements and the money so that they can post bail,” said Bishop Calang.

Protestant Bishop Redeemer Yanez of Koronadal, the brother of one of those arrested, questioned the validity of the arrest warrants, describing them as "defective and fictitious."

"There was no signature of the issuing judge or court. The names of the accused are unknown to all the individuals who were arrested," said the bishop.

"This is clear harassment of the church and the people who are trying to amplify the voice of the poor."

Ritchie Masegman, spokesman of the Promotion of Church People's Response, decried what he described as increasing attacks on church institutions.

Rights group Karapatan has recorded 351 cases of what they said were illegal arrests and detentions in Mindanao involving 1,599 individuals from July 2016 to June 2018.

"Activists and church workers are being victimized while government and military officials trumpet their false claims that there are no human rights abuses," said Cristina Palabay of Karapatan.

Mark Saludes and Bong Sarmiento contributed to this report.