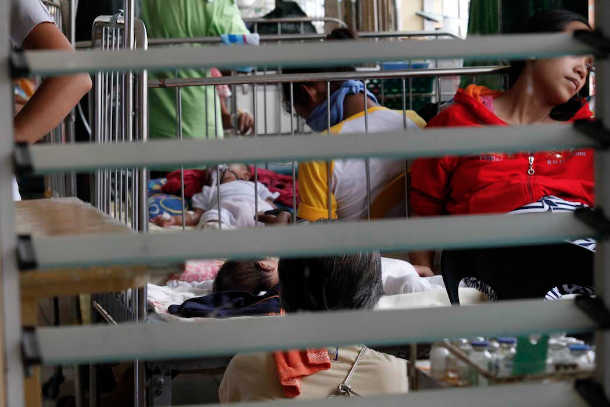 Patients struck down with dengue fill the corridors of a hospital's pediatric ward at the height of an outbreak of the disease in the Philippines. (File photo by Jono Rinoza)

Palo Archdiocese in the central Philippines has declared war against dengue, a mosquito-borne disease that has killed at least 622 people and infected more than 146,000 others across the country since January.

In the Eastern Visayas region, which has with 4.4 million inhabitants, dengue cases have exceeded 10,500 with at least 36 deaths. To show its support for a government drive against the dreaded disease, the archdiocese has opened church-administered hospitals to dengue patients.

"Catholic schools are also active in programs to reduce dengue cases," Palo Archdiocese spokesman, Father Chris Arthur Militante, said. On Aug. 6, the Philippine Health Department declared a "national dengue epidemic" due to a spike in cases in July. Authorities said dengue cases are 98 percent higher than they were in the same period last year. At least three out of six provinces and two cities in the Eastern Visayas region have issued a "state of calamity" alert because of the disease. The declarations will pave the way for the release of about US$4 million in health intervention funds to combat the disease in the city of Tacloban alone. The city saw 750 cases and eight death documented in the last week of July. On Aug. 9, Samar province, which also declared a "state of calamity," announced a "special non-working holiday" to hold a "search and destroy" operation against mosquito breeding sites. According to the government's Dengue Surveillance Report, the Western Visayas region has the most number dengue cases at more than 23,300. Health officials said severe dengue was first recognized in 1950s epidemics in the Philippines and Thailand. Today, severe dengue affects most Asian and Latin American countries and has become a leading cause of hospitalization and death among children, and even among adults. A dengue vaccine, Dengvaxia, was licensed in December 2015 and has been approved by regulatory authorities in 20 countries. When introduced in the Philippines, it caused controversy after it was found it can increase the risk of a more severe type of dengue. The vaccine, however, was already given to over 80,000 schoolchildren before its use was stopped in 2017 after at least 142 people, mostly children, died after reportedly receiving the vaccine.

The virus is carried by female mosquitoes mainly of the species Aedes aegypti, and causes flu-like illness that affects infants, young children, and adults.