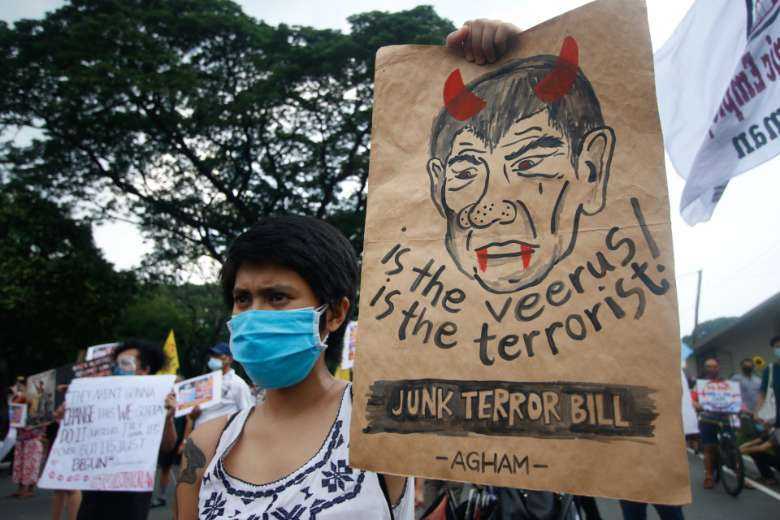 The Philippines' highest court has struck down a "killer caveat" in President Rodrigo Duterte's controversial anti-terrorism law, but critics said the rest of the legislation still threatened human rights.

The law, which took effect last year, gives the country's security forces sweeping powers to go after suspected terrorists, but opponents say it is being used to stifle dissent and target government critics.

Lawyers, journalists and rights groups had petitioned the Supreme Court to remove sections of the law they argued were unconstitutional.

In a brief statement on Dec. 9, the court said the full bench had voted in favour of declaring two parts of the law unconstitutional.

The petitioners said one was a provision they had dubbed a "killer caveat," which they had argued was so vague that a protest or strike could be declared an act of terrorism.

Its removal was an "important win for the protection of civil liberties," said Jose Diokno of the Free Legal Assistance Group.

The anti-terrorism council, comprised of members of Duterte's cabinet, can order the warrantless arrest of anyone they deem a terrorist

Others were more cautious after the court rejected challenges to other provisions.

"We welcome the striking down of the killer caveat," said environmental activist network Kalikasan. But it noted the court upheld "the draconian powers of the anti-terrorism council that arrests, harasses and murders with zero regard of your legal standing."

The anti-terrorism council, comprised of members of Duterte's cabinet, can order the warrantless arrest of anyone they deem a terrorist. Suspects can be detained for up to 24 days without charge.

National security adviser Hermogenes Esperon declined to comment until he had seen the ruling. The full decision has not yet been published.

The government has argued the law is needed to combat terrorism in the country's south, where communist and Islamist groups have waged long-running insurgencies.

But UN human rights chief Michelle Bachelet previously expressed concerns the law could blur the distinction between criticism and criminality.

Several opponents of Duterte's administration have been put behind bars, including opposition Senator Leila de Lima who faces drug charges she insists were fabricated to silence her.

Veteran journalist Maria Ressa, a co-winner of this year's Nobel Peace Prize and one of the petitioners challenging the anti-terrorism law, is on bail pending an appeal against a conviction last year in a cyberlibel case.