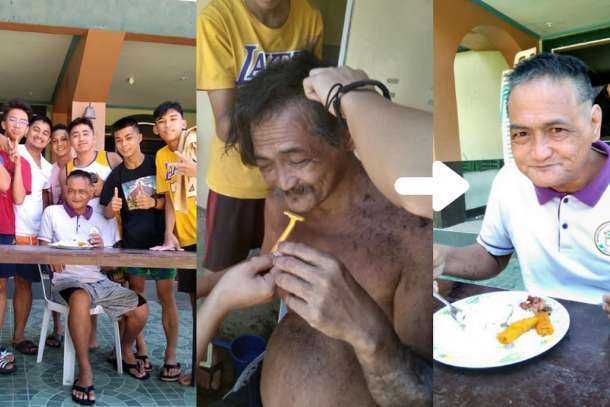 A group of altar servers have earned praise after a post went viral showing how they helped a beggar in Davao province in the Mindanao region.

The servers of San Roque Parish in Mawab posted on Oct. 3 a picture of a homeless man known as Totong being fed and taken care of by the altar boys.

The group also showed pictures of Totong having a haircut and shave thanks to the group of boys.

Local officials confirmed the man was homeless and begging for food until the altar boys found him and gave him a place to stay in their parish.

Sorsogon diocesan priest Father Joem Afable said the altar servers had developed a “sense of brotherhood” for the mission of Christ and his church.

“Being in a group of altar servers teaches a person that his role is to serve, to assist the priest and Jesus, in his ministry. And in so doing, he realizes that he is not only meant to serve Jesus, the high priest, but also the poor and the marginalized,” he said.

"Other altar boys should follow the examples of San Roque altar servers. They are an inspiration and show that no matter how little, even young boys can make a difference."

Teotristan Batutay, one of the servers, said they set themselves individual tasks in taking care of the beggar.

“Some of us bathed him. Some of us cut his hair. And some cooked food and fed him. We also gave him new clothes,” Batutay told UCA News.

Batutay said that what they did was not a great effort but a collaborative thing to make someone’s life “a little bit better.”

“Helping one person might not change the world, but it could change that person’s life,” Batutay wrote on social media.

He also said that what motivated the group to help him was their love for Christ who they saw was present in the poor, especially in beggars.

“We helped him because we felt sorry for him. Jesus was with him. He was him,” Batutay added.