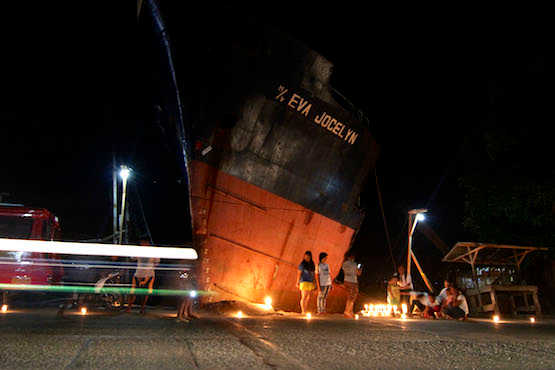 Survivors of Super Typhoon Haiyan light candles in front of the remnant of a ship that was washed ashore during the typhoon in 2013. The ship has been made into a memorial in honor of those who perished. (Photo by Vincent Go)

The social action secretariat of the Philippine Catholic bishops' conference is mulling the possibility of building tornado-resilient houses in disaster-prone areas.

Father Edwin Gariguez, head of the secretariat, said the plan should have been part of the recovery efforts in areas hit by Super Typhoon Haiyan in 2013.

"We didn't think of it because tornadoes are not that common in the country," said the priest. He said, however, that the church agency was able to build "typhoon-resilient houses" for victims of Haiyan.

Aside from building houses, the organization also assisted in the repair of homes in at least nine communities in three towns.

"The houses were built to withstand strong winds of a typhoon but I'm not sure if they can withstand winds from a tornado," said Father Gariguez.

He said tornadoes that hit some parts of the country in recent months should serve as a lesson to always prepare for the worst.

"With climate change, we should expect more. That's why when we build homes or shelters we should now factor the worst," said Father Gariguez.

On Nov. 8, people in the central Philippines marked the third anniversary of Super Typhoon Haiyan's landfall that resulted in the death of at least 7,500 people and damage to some 1.4 million homes.

On this day, Jocelyn Fornillos, who survived the disaster, attended Mass to remember those who died who were all buried in the town square outside the church.

"It's like a pilgrimage," she said. My family survived the storm, and I have to honor the memory of those who did not make it," said the 49-year old mother of three.

Archbishop Rolando Tria-Tirona of Caceres said that for Catholics "memory is imminently a solemn word" that binds them together.

The prelate celebrated a memorial Mass with Archbishop John Du of Palo in honor of those who perished in 2013.

"Sometimes, the most painful experience is the one that knocks our heart and opens our mind that we are not alone, that there are many people around us," said Archbishop Tirona.

He expressed admiration for disaster survivors who he said "provided us with inspiration to bounce back and stand up again."

"We see and admire your indomitable spirit and your courage, that you will not be defeated by any tragedy because you value your life," Archbishop Tirona said.

Archbishop Du, meanwhile, urged survivors to reflect on "faith, hope, and love," saying that these virtues are the "best weapon and shield" against anything.