Activists call for respect for human rights during a demonstration in Manila on Human Rights Day in this 2018 photo. (Photo by Jire Carreon)

Activists in the Philippines have welcomed the passage of a bill in the Lower House of Congress that seeks to prevent human rights violations and abuses being perpetrated against human rights defenders.

The House of Representatives approved on third and final reading on June 3 the Human Rights Defenders Protection Bill, which also imposes sanctions to counter impunity.The proposed law is based on the United Nations Declaration on Human Rights Defenders and the Model National Law on the Recognition and Protection of Human Rights Defenders drafted by the International Service for Human Rights.
Donate to UCA News with a small contribution of your choice
Once signed into law, the bill will see the creation of a Human Rights Defenders Protection Committee to be headed by a member of the Commission on Human Rights and six representatives from civil society groups."It is high time that we accord stronger legal protection to those who defend not only their own human rights and fundamental freedoms but those of others as well," said House member Edcel Lagman, the bill's principal author.The legislator expressed hope the bill would also be approved in the Senate.Human rights group Karapatan praised the bill’s passing, saying that "everyone’s right to defend and uphold human rights is in peril" due to alleged abuses by state agents."In the context of a repressive government’s non-stop suppression of people’s rights, we welcome this development as a long overdue measure," said Cristina Palabay, Karapatan secretary general.She said the passage of the bill "comes at a most critical time" because of the reported number of human rights defenders and activists being attacked and killed.Palabay noted that even though the Philippines was among the first to adopt the U.N. Declaration on Human Rights Defenders in 1998, a domestic law has yet to be enacted in accordance with the declaration.
Related News 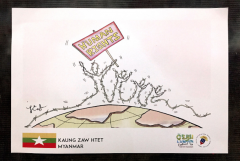