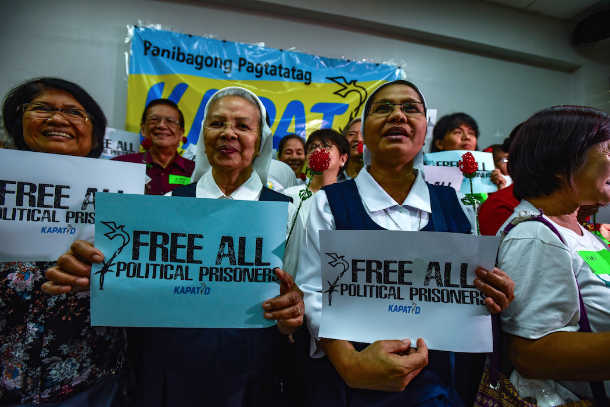 Nuns attend the re-launch of Kapatid, an organization of families and friends of political prisoners, in Manila, Philippine on June 15. (Photo by Maria Tan)

Rights activists in the Philippines have revived an organization comprising families and friends of political prisoners that was formed during the martial law years in the 1970s.

The group Kapatid (sibling) was formed in 1978 as a response to a crackdown on political activists during the dictatorship of Ferdinand Marcos. More than 40 years later, during the organization's relaunch on June 15, activists noted that there were still more than 500 political prisoners languishing in prison.

"Political prisoners are a symbol of unpeace and injustice," said former senator Wigberto Tanada. "They must be freed," he said. He said "the criminalization of political dissent is a carryover from the martial law years." "That this policy has survived into the present speaks volumes about the current state of human rights and justice under this administration," the former legislator added. Chito Gascon, chairman of the Commission on Human Rights, said the existence of political prisoners is not acceptable in a democratic society. "This is not appropriate for any society that claims to be free and democratic," said Gascon. "Those arrested only stood for their freedom and their rights," he added. Fides Lim, a member of the Kapatid board and wife of detained activist Vicente Ladlad, said the organization aims to work for the release of all political prisoners. She called for the immediate release of those who are sick and those who have been in prison for many years already. Lim cited the case of Ge-Ann Perez, who suffers from leprosy, and Juanito Itaas, the longest detained political prisoner to date, who has been in prison since 1989. Edre Olalia, chairman of the National Union of Peoples’ Lawyers, noted that political prisoners have been charged with "common crimes" in an attempt to hide the political nature of their cases. He said it is a violation of legal doctrine that prohibits the "criminalization" of political dissent. According to human rights group Karapatan, there were 548 political prisoners as of December 2018, at least 225 of whom were arrested since 2016.