At the same time, China announces its third action plan on human rights for 2016-2020 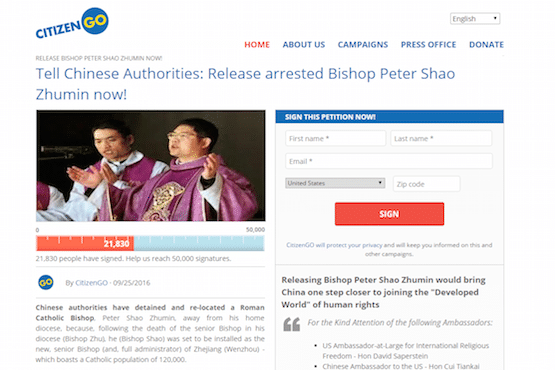 More than 22,000 people have so far signed a signature campaign calling for the release of underground Bishop Peter Shao Zhumin of Wenzhou. (Screen grab of citizengo.org)

More than 22,000 people have signed an online petition demanding that Chinese authorities release a Vatican-approved bishop who has been taken to one of China's more remote provinces.

The signature campaign for the release of underground Bishop Peter Shao Zhumin, offered in seven languages on online petition website CitizenGO, is addressed to Chinese, American and European Union ambassadors.

Chinese authorities have "detained and re-located" Bishop Shao, "away from his home diocese," said the petition which added that authorities did this to stop him from being "installed as the new, senior bishop (and, full administrator) of Zhejiang (Wenzhou)."

The appeal further stated that the government needs to seriously consider its stand on freedom of religion to be admitted into the "developed world" of human rights. Releasing and reinstating Bishop Shao would be a good start, it said.

Bishop Shao is not recognized by the Chinese government or the state-controlled Chinese Catholic Patriotic Association.

An anonymous church source from Wenzhou told ucanews.com that the petition campaign is needed as "it creates pressure that affects the decision of the authorities on how to handle our bishop."

The source also said that there is no clear information about when Bishop Shao will return.

Chinese authorities first took Bishop Shao from his diocese to prevent him from presiding over the funeral of his predecessor Bishop Zhu Weifang who died on Sept. 7, as this would signify him as successor.

Bishop Shao was allowed to return after the Sept. 13 funeral. But he was taken to Qinghai in China's northwest again because Bishop Anthony Xu Jiwei, another dual-approval bishop who managed the open community in neighboring Taizhou Diocese, died on Sept. 25.

Bishop Shao has been entrusted by the Vatican to take care of the underground community in Taizhou since 2011. It is understood that the second forced travel was carried out to prevent him from presiding over the funeral Mass for Bishop Xu.

The situation underscores ongoing tension between the Vatican and Beijing even as the two sides continue talks to try and harmonize the appointment of bishops that were resumed in 2014 after a period where all relations were frozen for several decades.

The petition came as China released its third action plan on human rights 2016-2020 on Sept. 29 declaring its aim to respect, protect and promote human rights.

"The action plan is only something on paper. The question is how it will be implemented," Patrick Poon Kar-wai, China researcher at Amnesty International, told ucanews.com.

"In the past year there were Protestant pastors framed and sentenced for protesting the demolition of crosses," he said. "The religious practices of Tibetan Buddhists and Uyghur Muslims are still subject to great restriction. I think religious freedom will hardly improve in a concrete way."

"The Chinese government will further tighten civil rights, including religious freedom, in the next few years to consolidate its regime," said Poon.