Perversion of conversion 'used to beat down Christians' 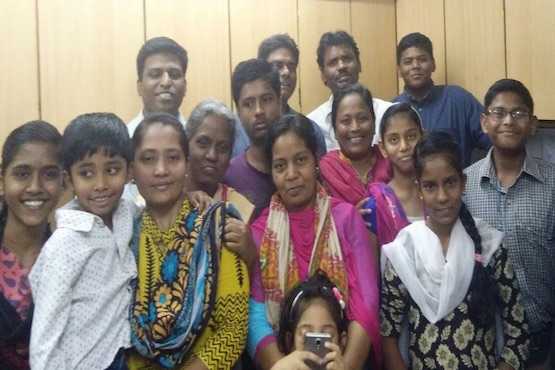 Parents of seven Christian children at a press conference Oct. 30 in Indore, Madhya Pradesh. The children were sent to a shelter for a week after two women they were traveling with were arrested on suspicion of kidnapping for the purpose of conversion. (ucanews.com photo)

Two recent cases have vindicated church leaders' belief that Christians are being targeted falsely in "kidnapping for conversion" cases to tarnish their image and handicap their work, lawyers say.

A state court in Indore, Madhya Pradesh, on Oct. 30 released seven children taken to a shelter a week earlier. Two women traveling with them, Anita Joseph and Amrit Kumar, were arrested and accused of kidnapping them.

Police said the women were arrested after a group called Dharma Jagran Manch (Vigilant Group for Hindu Religion) complained that the children, all aged under 14, were being taken to Mumbai by train for conversion to Christianity.

The two women are still in jail as their bail application was not heard by the court.

Six other Christians from Simdega in eastern Jharkhand state arrested on charges of religious conversion were granted bail Oct. 27. They were detained a month earlier and accused of distributing money for the purpose of converting villagers.

Parents of the seven children released from the shelter said at a Oct. 30 press conference, that all the youngsters were baptized Christians and the women were taking them to Mumbai with their permission.

The group of some 200 Hindu hardliners who went to the rail station had also attacked some of the parents who had come to see off their children. Police who detained the children and two women, sent the youngsters to a shelter without allowing their parents to go with them.

The pro-Hindu Bharatiya Janata Party (BJP) has governed Madhya Pradesh state for the past 14 years.

"This is becoming a politically motivated pattern to harass Christians," said A. C. Michael, an official of the Alliance Defending Freedom (ADF), a forum of volunteer lawyers providing legal advice to Christians.

Michael said the false accusation is "deliberately done knowing very well that such accusations will not stand up in a court of law."

"But it is part of a strategy," he said. "Drain the energy, time and resources of Christians and tire them out so that they do not have a normal peaceful life to do what they should be doing."

The attacks and court cases also help project an image of Christians as being anti-Hindu and helps keep people away from them, said Jaikar Christy, who works with the ADF.

"This year we've seen 27 cases in Madhya Pradesh, were Christians were falsely accused of conversion. We are in a democratic country but we live under fear," Christy told ucanews.com.

Bishop Vincent Barwa of Simdega, chairman of the Indian Catholic bishops' office for indigenous people, said the situation had worsened in his home state of Jharkhand after a new law was passed in August to restrict conversion.

"They are into these kinds of tricks to tell the world that missionaries are here only to convert. If a person tells a lie a thousand time or so... people may believe him," Father Fernandes said.

Gladson Dungdung, a tribal rights activist in Jharkhand, said the anti-conversion law was not yet being fully enforced in the state. However, he wondered how it would work under the BJP and the law's provisions.

"Now the media, law and order, and administration is in their hands so they can misuse it in any way they want … which is very unfortunate," Dungdung said.

He said the good work of the church has slowed down as they are more cautious not to send a message that "they are in the process of religious conversion."