Indonesian police arrest a demonstrator during a protest by mostly university students from the Papua student alliance in Jakarta in this 2017 file photo. A crackdown on freedom of speech is raising fears that Indonesia could be heading for a return to Suharto-era social controls. (Photo by Bay Ismoyo/AFP)

The local government in West Java's Cianjur regency told mosques in the region that their Friday sermons on Oct. 19 should rail against the lesbian, gay, bisexual and transgender (LGBT) community.

They were to be given a template on what to say that originated with the Religious Affairs Ministry and the Cianjur chapter of the Indonesian Ulema Council (MUI).

While there were no indications that other mosques across Indonesia were advised to adopt the theme, there are fears this is the start of a national program to control the content of sermons.

Initially mooted by the central government as a means of controlling radical preachers, it is now seen as a bid to further cement increasing intolerance and denial of the country's constitutional freedoms.

LGBT groups have been a favorite target of officials at all levels of government over the past three years. The Minister for Research, Technology and Higher Education Muhammad Nasir was the first to decry the emergence of LGBT groups on campus, declaring at the beginning of 2016 that there were moral standards to be maintained.

Universities have been at the forefront of discriminatory efforts, but the police have also been active in breaking up 'immoral' activities.

The constraints now encompass groups criticizing Indonesian rule in Papua, leftists of all persuasions, and the recent refusal to grant a permit to a group that wanted to criticize the policies of the International Monetary Fund and World Bank, which held their annual meetings in Bali earlier in the month.

Papuan separatist sentiment is a popular topic that earns censure from officials and pro-government elements in the community.

In the most recent case, an evening of music and theater performances, poetry readings and orations about conflict in the region ended on a low note with the arrest of four youths when people forcibly dispersed the event at a Papuan student dormitory in Makassar, South Sulawesi on Oct. 13.

In Bali, the "Peoples' Global Conference against IMF-WB" was given approval by local police to hold an "anti-globalization conference" as the multilateral agencies met on the island, but National Police insisted the event be canceled. 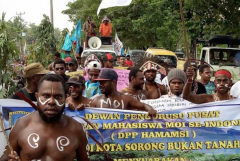 Organizers said police intelligence personnel had infiltrated the event's planning team as volunteers, subjecting them to intimidation and constant surveillance. Hoax banners of the event carrying logos of terrorism-linked organizations as co-sponsors also reportedly appeared around the planned venue.

The repressive actions come as tension rises in Indonesia ahead of next April's presidential elections. With both candidates — incumbent President Joko Widodo and challenger Prabowo Subianto — promising an end to inequality, the issue could be stirred up by hot-headed students and provocateurs.

Perhaps aware of the "Battle of Seattle" that marred the IMF-WB meetings in the West Coast U.S. city in 2000, the police weren't allowing potential protesters to gain any sort of foothold in Bali.

Anti-government student groups have already conducted several violent rallies protesting the government's handling of the economic situation and more students and activists could jump on the bandwagon if the authorities are perceived as using repressive actions against activists.

Other popular subjects for bans include any discussion of the attempted 1965 coup that brought former dictator Suharto to power, or the slaughter of communists that took place afterward.

While that subject has been taboo for decades, the current crackdown on freedom of speech brings fears that Indonesia could be heading for a return to social controls like those that limited public discussions during Suharto's New Order.

While the government is restricting individual freedoms, students in schools starting as young as kindergarten age are being exposed to Islamist brainwashing, according to a new survey.

The study, released by Jakarta's Syarif Hidayatullah Islamic University on Oct. 16, found that 53.06 percent of teachers at primary and secondary schools in the country have intolerant views. Conducted from Aug. 6 to Sept. 6, it questioned 2,237 Muslim teachers in more than 2,100 state-run and private schools.

The level of intolerance was assessed by several questions related to the establishment of minority houses of worships, religious schools or willingness to work for non-Muslim school principals. The study found that 56 percent of the respondents opposed the establishment of houses of worships other than mosques near their homes; 29 percent would petition against principals of different faiths; and 34 percent would reject non-Islamic religious schools.

Around 29 percent of the teachers agreed with the concept of the Islamic state and 27 percent were willing to wage jihad (holy war) to establish it.

"Moreover, 13.3 percent of teachers agreed to target police officers deemed to be enemies of Islam," said Saiful Umam, head of the university's Center for Islamic and Society Studies (PPIM), which carried out the survey.

Meanwhile 32 percent of the teachers in the survey were considered moderately tolerant, while only 3.93 percent were "very tolerant." Alarmingly, levels of intolerance tended to be higher in pre-school institutions such as kindergartens and Islamic kindergartens, which are managed by the Religious Affairs Ministry.

The survey adds to the concerns over the shrinking public space for critical opinion. It suggests that if no action is taken by the government and civil society to defend open public discourse, the next generation of Indonesians is in danger of adopting their teachers' intolerant and prejudiced worldviews.

Hopes that the end of the Suharto regime in 1998 might bring a more relaxed attitude to issues such as religion and social behavior have largely been dashed. Conservative communities are emboldened to take vigilante efforts to stifle freedom of speech and association and are tolerated by the police in applying pressure on critical voices.

The country appears inevitably heading back to the constraints of the Suharto era, but with conservative Islam setting the rules, just as the old dictator feared, leading him to keep a tight lid on its proponents. Twenty years on, with the lid on conservative Islam well and truly lifted, some are wondering whether any gains have been achieved.