Statistics suggest that, contrary to popular perception, Christians are the world's most persecuted religious minority. 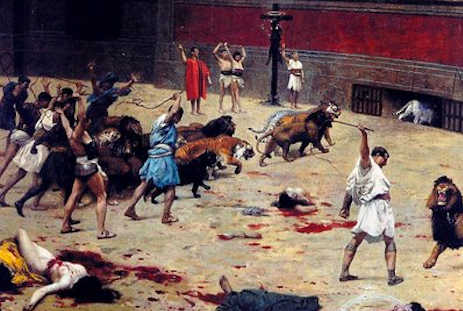 In Nigeria, the militant Islamic Boko Haram movement has launched a religious cleansing campaign against Christians in the country’s north. It would be somewhat comforting to regard the atrocities there, which include machete-wielding fanatics attacking pregnant Christian women and young girls, as an isolated case. Alas, that option is not available to anyone whose eyes are open. Today, Christians are by far the most persecuted religious group on the planet. As a result, defense of persecuted Christians is destined to be the defining religious freedom struggle -- indeed, a defining human rights struggle -- of the early 21st century. As counterintuitive as it may seem for Westerners long accustomed to thinking of Christians as oppressors, not the oppressed, empirical confirmation of the point is depressingly easy to find. The Pew Forum estimates that Christians face persecution in a staggering total of 133 countries, representing two-thirds of all nations on earth. The Germany-based International Society for Human Rights, a secular organization, estimates that 80 percent of all acts of religious discrimination in the world are directed against Christians. Some 150,000 Christians are killed for their faith each year, according to both the Catholic relief agency Aid to the Church in Need and the evangelical group Open Doors. Those statistics are fleshed out in all-too-numerous stories of Christians who paid the ultimate price during just the past year. They include Mary Elizabeth Macías Castro, a Mexican Catholic laywoman and blogger, killed in September for exposing the activities of drug cartels; Sr. Valsa John, of the Sisters of Charity of Jesus and Mary, who was murdered in India for defending the tribal underclass against mining interests; and Shahbaz Bhatti, a Catholic and the lone Christian in the Pakistani cabinet, assassinated in March for opposing the country’s notorious blasphemy law. Swiss Cardinal Kurt Koch, the Vatican’s top official for relations with other Christians, recently proposed “Ecumenism of the Martyrs” as the new basis for unity, given that all Christian churches today share in the bloodshed. Defending these Christians is not about parochial bias, or resurrecting some notion of the “church militant.” Persecuted Christians deserve pride of place today for the same reason that Soviet Jews did in the 1970s, or black victims of apartheid did in South Africa during the 1980s -- because they’re the ones whose suffering is most acute. Full Story: Defense of Christians a defining human rights struggleSource: National Catholic Reporter