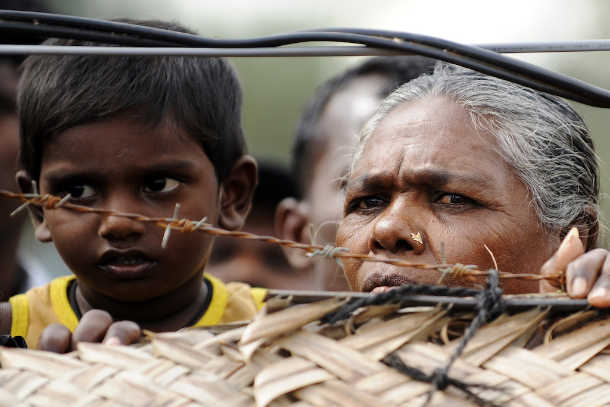 Civilians displaced by Sri Lanka's civil war peer from behind barbed wire fences surrounding their internment camp in Vavuniya on Nov. 21, 2009. A UN report says minorities have suffered from extreme violations of freedom of religious belief since the 26-year conflict ended in 2009. (Photo: AFP)

A Christian group has hailed the significance of the findings of a UN special rapporteur’s report on violations of freedom of religion in Sri Lanka.

The report, which was recently presented to the UN Human Rights Council (UNHRC), details how religious minorities including Christians, Muslims, Hindus and Jehovah’s Witnesses have suffered from extreme violations of freedom of religion or belief since Sri Lanka’s civil war ended in 2009.

The British Pakistani Christian Association (BPCA) says the findings tally with its own book, UK Home Office Denialism of the Persecution of Christians in Sri Lanka, due to be published in May.

Authored by Desmond Fernandes, a former lecturer at De Montfort University in England, the book provides extensive documentation drawn from a variety of sources to support the special rapporteur’s contention that religious minorities face restrictions in the manifestation of their religion such as proselytization, conversion and building of places of worship in addition to numerous violent attacks.

The book documents the nature and extent of persecution of Christians in Sri Lanka and the way in which the UK Home Office continues to assert that religious minorities do not face a real risk of serious harm or persecution in Sri Lanka.

"During our meetings and communications, we were informed about their despondency that so little had changed since the end of the civil war,” she said.

"Assurances made for change made by the government of Sri Lanka never came to fruition and known perpetrators of war crimes have thus far escaped justice.

"By withdrawing from the UNHRC co-sponsored resolution [to undertake accountability and reconciliation after the civil war], the Sri Lankan government has exhibited little or no passion to correct the wrongs of the past and it has been a devastating blow to campaigners.

"Moreover, societal divisions have persisted and persecution in the country is evidently increasing, leaving minority people's hopes for sustainable peace at its lowest ebb. We continue to pray for Christians in Sri Lanka and within the whole of the South Asian subcontinent."

In his report, Ahmed Shaheed, the UN’s special rapporteur on freedom of religion or belief, said there has been no closure on several issues relating from the 26-year civil war.

“While there have been some elementary steps taken, lack of accountability and impunity remains a widespread concern, perpetuating a sense of insecurity among all religious communities,” the report states.

“The transitional period has been marked by simmering tensions between ethno-religious communities. These challenges appear to be related primarily to the state-religion relationship which offers majoritarian privileges, undermining equal protection of the law for minorities.

“Moreover, there have been recurrent inter-communal violence and religious extremism in the past years before the Easter bombings in 2019.”

Religious minorities face restrictions, their places of worship are desecrated and their religious activities such as worship are disrupted by locals and authorities, Shaheed said.

“Aggressive campaigns by militant nationalist and religious groups against ethnic, religious and other minorities, particularly Muslims, are particularly concerning,” the report states.

Fernandes of the BPCA said Sri Lanka faces a lack of equality among religious communities.

“There is a general perception by the victims that perpetrators of hate speech are free to continue their campaigns and cause harm without any legal repercussions. The minority communities are feeling extremely vulnerable with the constant threat of hate speech and hate crimes while they have no recourse for justice,” he said.

“Most of them have lost their faith in the state and law enforcement agencies after multiple traumas from the violence.

“It is also worth noting that such violence did not exclusively target Muslims; similar violence had been committed also against Tamils and Christians at various points in time.”