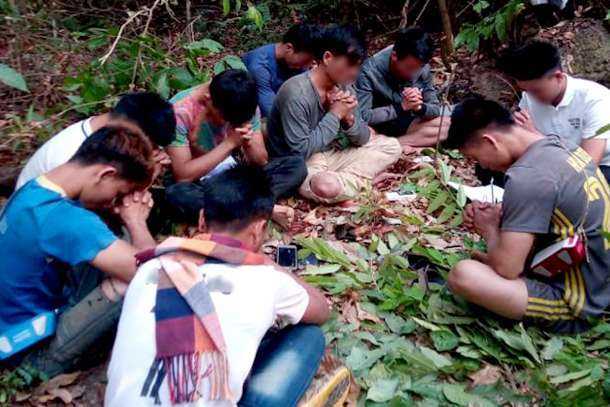 Christians in Laos continue to face various forms of harassment and discrimination, which has forced many of them, including Catholics, to practice their faith in secret, according to foreign Christian groups.

The Christians, who live in a rural area, feel it is necessary to hold their religious ceremonies in such circumstances because practicing their faith openly in their village could expose them to harassment from non-Christian locals, according to Open Doors International, a non-denominational mission that supports persecuted Christians in over 70 countries worldwide.

“Two months ago, these believers were threatened [when] other members of their village said they would kick them out of the community because of their faith,” the group says.

“So they can no longer meet to pray inside their village. But instead of giving up, they are finding other ways to meet as secretly as possible.”

The plight of these Christians is symptomatic of widespread prejudices against Christians in the communist nation of seven million where Christians account for around 2 percent of the population, with half of them believed to be Catholic.

Although Laos’ communist government nominally guarantees religious freedom for all citizens, in reality Christians are routinely shunned by locals and face harassment by officials. The regime recently enacted Decree No. 238 on Associations, which allows local authorities to restrict the operations of civil and religious associations, including churches.

Other laws are also used to place restrictions on religious practices, including the holding of prayer services, the ordination of religious leaders, and the free movement of believers.

“The government uses all the administrative machinery down to the elders of villages to prevent people from becoming Christians or from punishing those who dare,” some Laotian Christians were quoted as saying by a foreign Christian organization.

Christianity is often singled out for special restrictions because the faith has long been portrayed by official propaganda as an alien religion that was imported into the country by the missionaries of colonial powers, including the United States, whose war with Vietnam resulted in large-scale destruction of Laos during massive bombing campaigns aimed at uprooting communist guerrillas from the jungles.

A Christian villager recently told Radio Free Asia that he had been scolded by an official over his Christian faith. “You people believe in America’s god,” the official reportedly told the villager. “Don’t you remember what America did to our country?”

Rights groups have documented numerous similar instances of alleged discrimination against local Christians. “Christianity is viewed as a North American religion or a tool of missions to undermine the Laotian regime,” says The Voice of the Martyrs, a US-based Christian outreach mission.

“While house churches and church buildings do exist, the vast majority of them do not have a trained lead pastor. However, in most villages, church buildings are not allowed. If village leaders notice that a house church is growing, they will try to stop it,” the mission adds.

Christians are often deprived of even basic rights, according to foreign rights groups and Christian organizations. If they are cheated in land or business deals by other locals, they often have no real recourse to justice as officials turn a blind eye to many injustices if they involve Christians, rights groups say.

“Christians generally have difficulties providing for themselves and their families, for they often cannot get jobs — most of which are available through the government,” The Voice of the Martyrs says.

“Christians commonly are denied medical treatment, education and other social services. Arrests of believers frequently take place, resulting in detainments that average for up to a week,” it explains.