The facade of the Catholic cathedral in Manila is bathed in red light during the observance of Red Wednesday on Nov. 27. (Photo: Angie de Silva)

Christians who suffer from persecution across the world were honored during the observance of "Red Wednesday," a global campaign to encourage people to stand up for religious freedom.

In the Philippines, red lights illuminated at least 2,000 prominent landmarks and churches across the country to highlight global religious persecution.In his message during a Mass to mark the occasion on Nov. 27, Bishop Pablo Virgilio David of Kalookan reminded Filipinos that "martyrdom ... is about living for the faith."
Donate to UCA News with a small contribution of your choice
The prelate, who has been charged by authorities with sedition and other criminal offenses for his criticism of government policies, urged Christians to forgive their persecutors."It is not the business of God to condemn but to save," he said in his homily in Manila Cathedral.Red Wednesday is a campaign promoted by Aid to the Church in Need (ACN) and the group Christian Solidarity Worldwide.Jonathan Luciano, director of ACN in the Philippines, said the campaign will soon be an official Philippine Church observance."We pray that our request will be granted," he said, referring to a formal request his group submitted to the bishops' conference."If that happens, Red Wednesday will be an official church event starting next year," he added. "It will be on the Wednesday after Christ the King Sunday. The feedback coming from the bishops from dioceses that observed Red Wednesday are all positive." 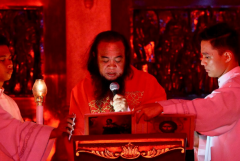 Thank you. You are now signed up to Daily newsletter
A study on religious freedom estimated that about 300 million Christians around the world live in an environment of violent persecution and discrimination and are prevented from practicing their faith.The Religious Freedom Report 2018 released by ACN early this year noted that persecution includes unexpected resettlement of minority Christian communities, sexual abuse of women by extremist groups, and more violent attacks such as bombings, mutilation and murder.In the Philippines, extremists aligned with Islamic State destroyed homes and churches when they attacked and occupied the southern city of Marawi in 2016.Early this year, a Catholic cathedral in the southern Philippine province of Sulu was bombed during a Mass, killing at least 20 people and wounding 80 others.During this year's observance in Manila, Christians from other denominations and ecumenical groups joined Red Wednesday activities in light of the observance of the Year of Interreligious Dialogue, Ecumenism and Indigenous Peoples next year.ACN said in its statement that through Red Wednesday people will realize that Christians are not only "more persecuted than any other faith group but ever-increasing numbers are experiencing the very worst forms of persecution."