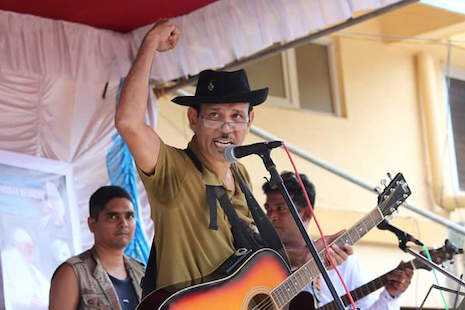 People in the western Indian state of Goa suspect foul play was behind the reported accidental death of a former priest who led protests against the exploitation of the environment.

Former Blessed Sacrament Father Bismarque Dias' body was fished out of the Mandovi river Nov. 7, two days after he was reported missing. He left the priesthood three years ago to contest state elections in Goa.

Police initially believed the former priest drowned in an accident.

"This is not an accidental drowning because he was an excellent swimmer," Sudeep Dalvi, a close associate, told ucanews.com adding that the former priest had faced deaths threats and the police theory of his death was full of holes.

Dias fought against illegal mining and opposed land projects such as hotels, golf courses and an airport on the grounds that such projects irreversibly destroy land, trees, water sources and the environment.

After he lost the elections, he led a band of singers in creating public awareness about government-supported land development projects that he said benefited the rich at the cost of poor farmers. This activism often put him at loggerheads with politicians and land developers.

According to the police autopsy report, Dias died due to drowning, but activists dispute this, pointing to injuries to his body.

Sabina Martins, convener of Goa Bachao Abhiyan (save Goa forum) said police initially insisted on death due to drowning but they are now open to "other possibilities." Following demands by social activists, a second autopsy was conducted Nov. 8, but the findings have not been made public.

Floriano Lobo, who saw the body after it was fished out of the river, said there were injuries on the body, which give credence to the suspicion that Dias was attacked before he drowned. The injuries were not mentioned in the first autopsy report, he added.

Daniel Baretto, a villager in Goa, said Dias didn't care about the powerful because he wanted to save Goa from environmental degradation. "All this was linked to land and he fought against the high and mighty with a missionary zeal, without thinking of the risk he was exposing himself to."

Earlier, citing the parable of the Good Samaritan, Dias said he was entering the political arena to tend the ailing land, trees and children of the state. "If we miss this opportunity to really do something, then it will be gone," he once said.