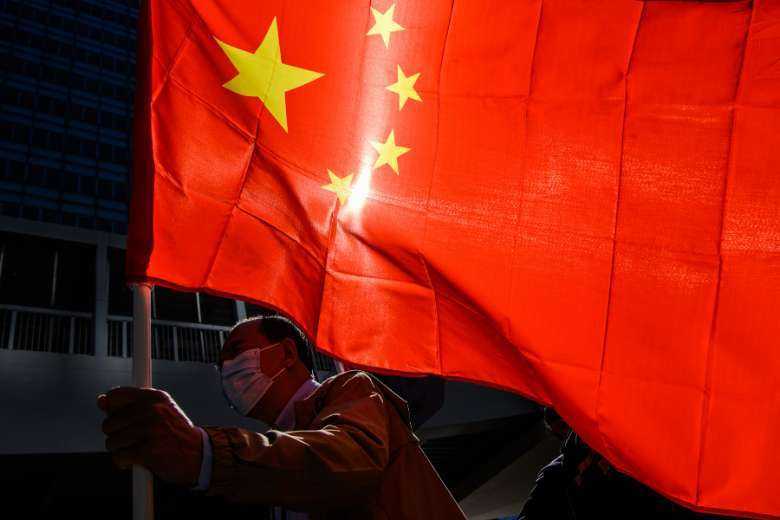 A pro-Beijing supporter holds China's national flag as he waits outside the Legislative Council in Hong Kong on Nov. 12, 2020, a day after the city's pro-Beijing authorities ousted four pro-democracy lawmakers. (Photo: AFP)

China is expanding its nuclear arsenal much more quickly than anticipated, narrowing the gap with the United States, the Pentagon says.

China could have 700 deliverable nuclear warheads by 2027 and could top 1,000 by 2030 — an arsenal two-and-a-half times the size of what the Pentagon predicted only a year ago, according to a report published on Nov. 3.

The People's Republic of China (PRC) "is investing in, and expanding, the number of its land, sea and air-based nuclear delivery platforms and building the infrastructure necessary to support this major expansion of its nuclear forces," the report stated.

The assessment came in the US Department of Defense's annual report to Congress on Chinese military developments.

Like the United States and Russia, the two leading nuclear powers, China is building a "nuclear triad," with capabilities to deliver nuclear weapons from land-based ballistic missiles, from missiles launched from the air, and from submarines, it said.

The report said China is likely not seeking a capability to launch an unprovoked nuclear strike on a nuclear-armed adversary — primarily the United States — but wanted to deter attacks from others by maintaining a credible threat of nuclear retaliation.

The rivalry has increased concerns about a possible clash between the US and China, especially over Taiwan

A year ago, the Pentagon's China report said the country had about 200 deliverable warheads and would double that by 2030.

The acceleration "is very concerning to us," a US defense official said. It "raises questions about their intentions," the official said, calling for more transparency from Beijing over its nuclear force development.

The Pentagon has declared China its principal security concern for the future, as Beijing undertakes to build the People's Liberation Army into "world-class forces" by 2049, according to its official plan.

China is expanding its air, space and sea forces with the aim of projecting its power globally, much as the United States military has for decades.

The rivalry has increased concerns about a possible clash between the US and China, especially over Taiwan, which China claims as its territory but which is closely supported by the Untied States.

The new US report said China's swift military modernization aims to have the capability by 2027 to overcome any pushback to an effort to reclaim Taiwan, by pressure or military force.

By 2027, the report says, China aims to have "the capabilities to counter the US military in the Indo-Pacific region, and compel Taiwan’s leadership to the negotiation table on Beijing’s terms."

The report confirmed news stories in recent months saying that in October 2020 Pentagon officials were forced to quell real concerns in Beijing that the United States, driven by domestic political tensions related to the presidential election, intended to instigate a conflict with China in the South China Sea.

After senior Pentagon officials moved to directly speak to Chinese counterparts, the concerns eased and a Chinese defense spokesman announced publicly that the United States in fact did not plan to trigger a crisis.

"These events highlighted the potential for misunderstanding and miscalculation, and underscored the importance of effective and timely communication," the report said.

The Chinese have denied the lab had anything to do with the Covid outbreak but have limited access to it from investigators.

The report also questioned the PLA's intent in biological research into substances that potentially have both medical and military uses.

Such concerns have echoed since early 2020 after the Covid-19 pandemic erupted first in the area of a Chinese biological research laboratory with PLA connections in Hunan.

The Chinese have denied the lab had anything to do with the Covid outbreak but have limited access to it from investigators.

"We are witnessing one of the largest shifts in global geostrategic power that the world has witnessed," Joint Chiefs Chairman General Mark Milley told the Aspen Security Forum.

"That means that we're going to have to put a premium, in my view, on maintaining great power peace," he said.