An inquiry into child abuse and some heated words from two prominent Church men have turned the spotlight once again onto the responsibilities of a confessor. 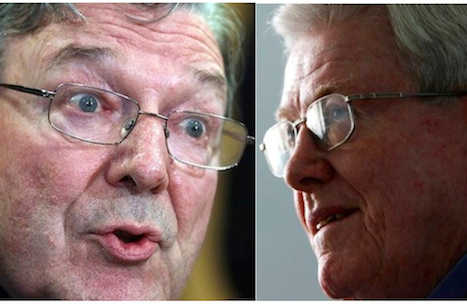 Politicians, pundits, and even a few dissenting Catholic clerics are calling upon Catholic priests to break the confessional seal in sex-abuse cases. Attorney general Nicola Roxon said that a federal commission investigating sexual abuse would take up the question of whether priests should be required to disclose information from sacramental confessions. Prime Minister Julia Gillard also said that the commission should discuss the matter. But Senator Nick Xenophon, a persistent critic of the Catholic Church, was more candid, saying that the government’s recognition of the confessional seal is “a medieval law that needs to change.” Cardinal George Pell of Sydney has stated that the Church will never allow priests to disclose what they heard in the confessional. But the cardinal said that priests who suspect someone is involved in abuse should refuse to hear that person’s confession. One Sydney priest who works with street children disclosed that he never hears confessions because he would want to disclose any report of sexual abuse to police. Bishop Geoffrey Robinson, a retired auxiliary of the Sydney archdiocese, added to the public furor when he criticized Cardinal Pell’s stand, and said that he would break the confessional seal for the “greater good” of reporting an abuser. And another prominent Catholic dissident, Father Bob Maguire, said that he too would inform police about a penitent who confessed to sexual abuse. (Bishop Robinson, who stepped down in 2004, at the age of 66, has been an outspoken critic of Church teachings. The Australian bishops’ conference took the highly unusual step of issuing a caution about a book the bishop had written, saying that the work misrepresented the Catholic position on "among other things, the nature of Tradition, the inspiration of the Holy Scripture, the infallibility of the Councils and the Pope, the authority of the Creeds, the nature of the ministerial priesthood and central elements of the Church’s moral teaching." Father Maguire, an elderly priest who had long resisted efforts by the Melbourne archdiocese to force his retirement, also has a history of conflict with Church authority—including an episode in 2005 when he “heard confessions” on a radio call-in show.) An editorial in The Australian argued that the heated debate about the confessional seal was “entirely confected” for political purposes, in a “proxy war” aimed at opposition leader Tony Abbott, whose Catholicism has been a frequent topic of discussion. The Australian expressed confidence that the federal investigating commission would avoid a direct confrontation with the Church. “Those who see an opportunity to discredit the Catholic Church, however, will milk it for all it is worth,” the editorial said. Full Story: Australia: a campaign to break the confessional sealSource:Catholic CultureSee also:Editorial: A time for open confession/The Australian