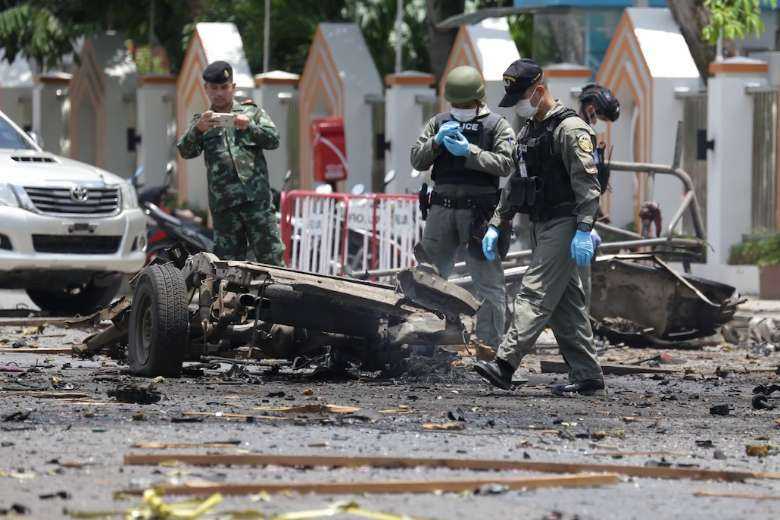 Away from international headlines, Thailand’s long-running yet little-covered Islamist insurgency carries on apace, a resolution nowhere in sight to a conflict that has claimed more than 7,000 lives since 2004.

Recent attacks on civilians by suspected insurgents in Thailand’s restive Muslim-majority southernmost region have set nerves further on edge and made the chance for peace look as remote as ever.

In one of the latest incidents on Dec. 13, a bomb set by suspected Muslim separatists in Pattani, one of three restive provinces in Thailand’s so-called Deep South, went off by a passing train, injuring a passenger and two railway employees on board.

The train was on its way to a province further north when the bomb went off, blowing out windows and causing alarm among the 300 passengers on board.

The suspected terror attack brought condemnation from Thai security officials who publicly rebuked insurgents for targeting civilians, but such rebukes are unlikely to have any effect on the methods of Islamist militants, who are believed to come from the ranks of disaffected Muslim youths.

Two days previously, a bomb was set off in Narathiwat, another of the three Muslim-majority provinces bordering Malaysia, injuring two monks on their morning alms round. Two army rangers escorting the Buddhist clergymen to provide them with security were also injured in the blast.

No culprits have been identified in either case, but Thai security forces have laid the blame on shadowy Islamist separatist groups who want to gain independence for the Buddhist-majority nation’s three southernmost provinces, which are predominantly populated by Malay Muslims.

In recent weeks and months, suspected insurgents have kept up a spate of bombings and other attacks in an effort to drive Buddhists and people they consider pro-Thai collaborators from the region, which came under Buddhist rule from Bangkok in the 19th century.

The attacks have been relatively limited in scope, probably because of the limited capacities of insurgents along with stepped-up security measures by Thai forces stationed in the area. However, they have had their effects, if only by serving as reminders that ongoing efforts to bring insurgents to the negotiating table have yet to bear fruit.

Such efforts are bound to fail, for the time being at least, because many of the insurgents who operate in loosely connected cells appear set against normalizing relations with the government in Bangkok.

“Continuing violence, distrust on both sides, and the lack of a valid unified negotiating voice among the insurgents have combined to thwart [a long-running peace initiative],” Paul Chambers, a prominent expert on Thailand who specializes in civil-military relations, wrote in a recent article.

Thailand’s military-allied government, which has been in power since it staged a coup in 2014, has pledged to end the southern insurgency. So far, though, it has failed to deliver on that promise.

The administration of Prayut Chan-o-cha, a former army chief who spearheaded the putsch, has kept a tight lid on student-led pro-democracy protests in Bangkok by employing riot police against peaceful demonstrators in frequently violent manners. At the same time, Thai security forces have demonstrated far less success in tackling an insurgency conducted with bombs and guns.

“This government only knows how to crack down on people like us — unarmed protesters. In the south they have made a bad mess, but they will never admit it. They continue to ignore the situation in public [in the hope that] people will forget about it,” Phichit Thongsuk, a young pro-democracy activist who comes from southern Thailand, told UCA News.

Some of the tactics employed by Thai security forces in the region have hardly improved their reputation. Rights advocates who have followed developments in the Deep South have long accused the regime of alienating many Muslims through summary arrests, enforced disappearances and the torture of suspects.

Meanwhile, Muslim separatists have made their views known about outreach efforts from the Thai state by targeting administrative initiatives such as polls. Late last month, for instance, a bomb hidden in a parked motorcycle was exploded beside a convoy of eight vehicles carrying ballot boxes for elections in Yala, the third restive Muslim-majority province. Several vehicles were damaged in the blast and one polling official suffered minor injuries.

Insurgents have also attacked schools and teachers in an effort to delegitimize state-run education, which places a premium on seeking to inculcate Muslim children with a love of Thailand. In the process suspected insurgents have committed potential war crimes by routinely targeting not only security forces but also civilians —teachers, administrators, Buddhist monks — through various acts of terror.

Because of the constant tit-for-tat violence, however, some of the worst-affected people in the troubled region are Malay-Muslims themselves. They are “marginalized people caught in the middle” who include women, children and the elderly, according to Chambers.

“Though they receive scant attention, these civilians have directly and indirectly suffered the most from the unending violence. Thailand’s Deep South possesses more incidence of poverty than any other region in the country,” the expert noted.

“Resuming negotiations and arriving at a solution to Deep South violence requires greater trust and sincerity by both sides and pressure from international and civil society actors.”