Human rights activists call for the release of political prisoners during a demonstration outside the Justice Department in Manila on June 15. (Photo by Rene Sandajan)

The Philippine peace panel that opened talks with communist rebels in Norway this week has vowed to recommend the immediate release of political prisoners and detainees based on humanitarian grounds.

Rebel leaders from National Democratic Front of the Philippines and representatives of incoming president Rodrigo Duterte were meeting in Oslo this week to prepare for the resumption of peace negotiations to end almost 50 years of insurgency in the Philippines.

In a joint statement released on June 16, the peace panel and the rebel leaders agreed to include an amnesty proclamation for all political prisoners on the agenda of formal talks that will start in July.

The agreement also provides that the government panel will recommend to Duterte the immediate release of rebel “consultants” to enable them to participate in the peace negotiations.

"The success of the exploratory talks shows there is big hope and expectation that we can move forward to address the roots of the armed conflict and to achieve a just and lasting peace in the Philippines," said Luis Jalandoni, head of the rebel panel.

"We are happy that peace negotiations will finally resume and the incoming Duterte administration is interested in it," said exiled rebel leader Jose Maria Sison in a message to ucanews.com.

Edre Olalia, legal adviser to the rebels, described the talks this week as a "breakthrough."

Peace talks between the Philippine government and the rebels broke down in 2011, with both sides insisting on preconditions before starting another round of formal talks. 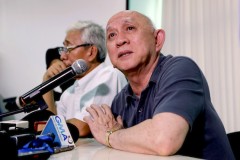 Church groups back resumption of talks with rebels

The informal meeting this week came after the rebel group announced last month that it is open to signing a ceasefire agreement with the incoming Duterte administration.

Issues that both parties agreed to discuss in next month's formal talks include the affirmation of previously signed agreements; accelerated process for negotiations, including the timeline for the completion of the remaining substantive agenda for the talks, socio-economic reforms, political and constitutional reforms, and an end to hostilities and disposition of forces.