Peace is not just an absence of war 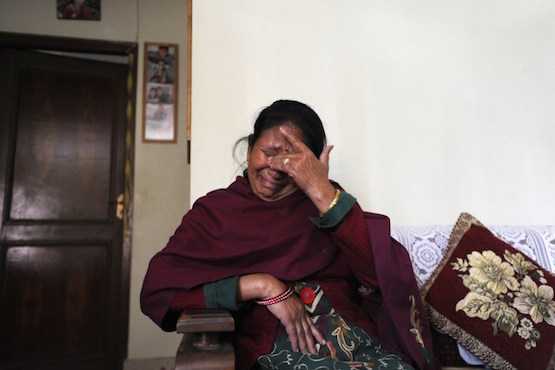 Nepalese woman Sabitri Chilwal weeps during an interview in Kathmandu on Nov. 15. Her husband was shot dead by alleged Maoists in 2004 during Nepal's decade-long war. Nov. 20 marked a decade since the Maoists signed a peace deal to end the conflict that claimed more than 16,000 lives, laying down their arms and promising to play by the rules of a parliamentary democracy. (Photo by AFP)

I am not sure what to call it: Maoist insurgency or "people's war." It was an armed conflict between the Nepalese government and the Maoists that ran from 1996-2006, claiming about 15,000 lives and displacing up to 250,000 people.

The decade-long civil war ended with the Comprehensive Peace Accord that set out major changes such as the abolition of the monarchy and the creation of a federal nation.

The Nepal Constituent Assembly was elected in order to create a new constitution and governed for an interim term of two years. The Constitution was finished in 2015 and Nepal was declared a secular and federal democratic nation.

In between 2006-2016, the Maoists got the chance to lead the government thrice but they started fragmenting. A number of new factions organized themselves under different agendas and some wanted to take up arms again. By 2013 the largest of the Maoist parties dropped to third place in the elections

Integrating Maoists back into society had various complications. Many had inter-caste marriages, encouraged by the communist philosophy of ending social discrimination, which has made it difficult for them to return to normal communities.

In many areas, Maoists were seen the bad guys and are still blamed. Female soldiers who were equal to men in the PLA have also found it difficult to return to their traditional roles after tasting the freedom of equal participation.

Large numbers of disenfranchised ex-PLA members remain a serious threat to Nepal's peace because they could be mobilized by another political force.

Two years back, I met one ex-member of the PLA. He survived the war but lives with bullet scars all over his body. He said he was not happy with the outcome of the conflict and had joined a new Maoist faction. He said he would take up arms again for the next revolution.

Another factor is the lack of justice for people whose loved ones disappeared during the war. Nanda Prasad Adhikari died after being on hunger strike for 333 days, demanding justice for the murder of his son. His wife, Ganga Maya is still on hunger strike.

Over 1,300 disappeared people are still unaccounted for. However, people doubt the political will of the Commission of Investigation on Enforced Disappeared Persons to find the truth when so many of the perpetrators still wield social and political power.

The Truth and Reconciliation Commission can grant amnesty to those who were involved in war crimes but they do not recognize the victim's right to reparation.

Relief packages from the government are mostly being taken by fake victims who have political power in the districts. Unfortunately, most of the people who qualify for aid reside in remote areas and are not informed of their rights, or they live too far away from distribution points.

The eyes of a young girl whose father disappeared have not yet dried. She said that her destroyed family still has not received reparation or aid because her relief package was stolen by a more powerful community member.

Nepal promulgated the new Constitution in 2015, turning the Constituent Assembly into a legislative parliament. They have been drafting new bills and laws which have divided citizens and caused over 40 deaths in violent clashes over issues such as provincial boundaries, citizenship and marriage.

The new Constitution has also been criticized for discriminating against women who cannot pass citizenship onto their children if they are single mothers or married to a foreigner.

Factionalism within political parties has been tough. Parties do not have much time to play a constructive role in national politics when they are mired in internal problems.

All these facts remind us that peace is not just an absence of war. The Nepalese peace process should be backed up by solid economic and social development; not just for victims and perpetrators but the entire Nepalese population because everyone has suffered.

If someone is found guilty of crimes against humanity they must be brought to trial. Let there be no miscarriages of justice and do not let impunity overrule human rights.

Having a new constitution does not mean the peace process is complete. Even though it is hard to make everyone happy, the constitution should not be a means of dividing people along ethnic and regional lines.

This is not only about politics and governance. The peace process must take in the wider socio-cultural and economic situation of all Nepalese people.