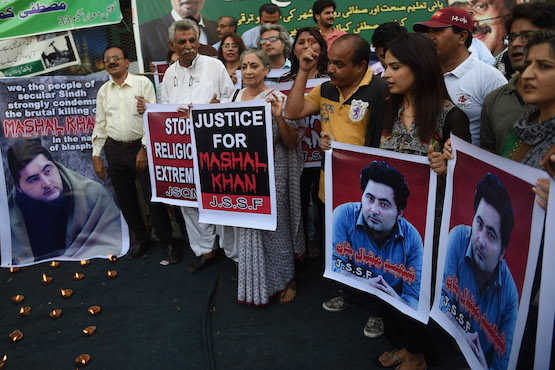 Pakistani demonstrators protest the killing of journalism student Mashal Khan in Karachi in April 2017. A court this month sentenced one person to death and five others to life imprisonment for killing Khan, who was falsely accused of committing blasphemy. (Photo by Rizwan Tabassum/AFP)

Christian and Muslim clerics signed a peace accord to restore calm in the Pakistani city of Lahore, a day after hundreds of minority families fled their homes fearing attacks from hard-line groups over alleged blasphemy.

More than 1,000 Christian families left the Shahdara neighborhood after locals protested against Patras Masih, 18, who allegedly shared a photo of a Hindu wearing shoes in Roza-e-Rasool, the burial place of the Prophet Muhammad in Medina, Saudi Arabia.

Masih was arrested on Feb. 19. His family is in hiding.

"He was a member of a Facebook page titled "paglo ki basti" (the slum of lunatics). The existence of this photo challenges the religious sentiments of Muslims. This may result in an unpleasant incident," said complainant Hafiz Muhammad Awais.

A mob carrying wooden sticks and placards gathered on a main road, burned tires and chanted religious slogans on Feb. 21 while demanding the public execution of the Christian sanitary worker. They also gathered outside the teenager's house and threatened to burn all Christian houses in the area.

Seven clerics from a local peace committee and 12 Christian leaders, including five pastors, signed the peace agreement on Feb. 21 at the police station in Shahdara, home to 1,500 Christian families.

Mary James Gill, a Christian member of the Punjab Assembly, officiated the agreement.

"We will allow Christians to return to their homes. Muslims and Christians should live in peace and brotherhood like before," said a statement from Muslims.

Christian leaders guaranteed that they will not interfere in religious matters of Muslims again. "Such an incident will not happen again. We shall respect Muslim faith, matters and festivals and urge our community to do the same," they said.

"We are engaging clerics to normalize the situation. A fact-finding mission of the Catholic bishops' National Commission for Justice and Peace wanted to visit, but we are waiting for the right time," Shehzad said.

"Patras Masih is illiterate and had little knowledge of using Facebook. He did not design the photo. We appreciate the role of police officials and the local administration to control the panic and demand speedy justice for Masih."

Blasphemy is a highly sensitive issue in Pakistan. Allegations have led to mob attacks on Christian settlements, especially in Punjab province. In 2017, Nadeem James, a Christian, was sentenced to death for sharing material ridiculing the Prophet Muhammad on the WhatsApp messaging service.