Francis denounces the worldly logic of power, explaining that Jesus brings true peace through meekness and the Cross 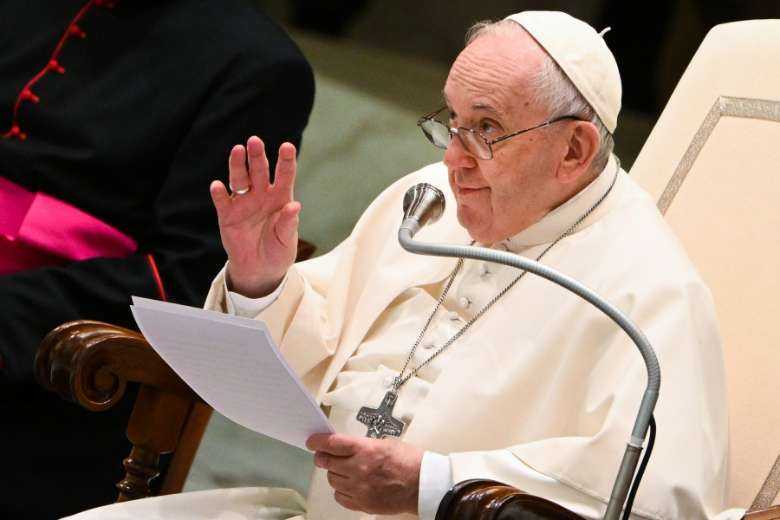 Pope Francis speaks during his weekly general audience at the Vatican on April 13. (Photo: AFP)

Jesus brings peace to today's shattered world through meekness and not through an "armed peace" that seeks to subjugate others, Pope Francis said.

During his weekly general audience on April 13, the pope said that the war in Ukraine, "like every war, represents an outrage against God, a blasphemous betrayal of the Lord of Passover, a preference for the face of the false god of this world over his meek one."

"Jesus' peace does not overpower others; it is not an armed peace," he said. "The weapons of the Gospel are prayer, tenderness, forgiveness and freely given love for one's neighbor, any neighbor."

Arriving at the Paul VI Hall, the pope was greeted with applause and cheers from the crowd, many of them young people who were in Rome attending UNIV 2022, an Opus Dei-sponsored gathering of university students from around the world.

Pope Francis dedicated his audience talk to the significance of Holy Week, which began with the commemoration of Jesus' entrance into Jerusalem on Palm Sunday.

While those who welcomed him thought his arrival would herald the liberation of Jerusalem from the Roman occupation, he said, Jesus was more concerned about his humble entrance into the city on a donkey.

"Indeed, Christ took on himself our evil, sin and death. In this way, he freed us. His peace is not the fruit of some compromise, but rather is born of self-giving"

"This is how Christ brings peace into the world: through meekness and mildness," the pope said.

Jesus' brand of peace, he explained, stands in stark contrast to "the peace that follows the strategies of the world, which believes it can obtain it through force, by conquest and with various forms of imposition."

"This peace, in reality, is only an interval between wars," the pope said. "The peace of the Lord follows the way of meekness and the cross: it is taking responsibility for others. Indeed, Christ took on himself our evil, sin and death. In this way, he freed us. His peace is not the fruit of some compromise, but rather is born of self-giving."

However, he continued, peace that is "meek and courageous" is a difficult path as evidenced by the people who praised Jesus' entrance only to shout that he be crucified a few days later.

Citing Fyodor Dostoevsky's acclaimed novel, "The Brothers Karamazov," Pope Francis recalled the story told within the novel of the "The Grand Inquisitor," a tale that imagines Christ returning to the world in Seville during the Inquisition.

Although Christ is welcomed, the inquisitor has Jesus arrested and rebukes him because he never "wanted to become Caesar, the greatest king of this world, preferring to leave humanity free rather than subjugate it and solve its problems by force," he said.

Jesus' reaction in the tale, which was to remain silent and softly kiss the inquisitor, shows that peace can come only from meekness, humility and love for others, the pope said.

Pope Francis called on Christians to place themselves during Holy Week "before the Crucified One, the wellspring of our peace and ask him for peace of heart and peace in the world."

"This year above all, it is a blessed occasion to pass from the worldly god to the Christian God, from the greed that we carry within us to the charity that sets us free, from the expectation of a peace brought by force to the commitment to bear real witness to the peace of Jesus," he said.