Peace a mirage for ethnic groups in Myanmar Rohingya refugee stand outside a makeshift shelter at Moynerghona refugee camp in the Bangladeshi district of Ukhia on Oct. 29. (Photo by AFP)

Manam Tu Ja, a Catholic and chairman of the Kachin State Democracy Party, said domestic attention and international pressure is currently focused on the Rohingya crisis.

He said this may delay reconciliation efforts to end the country's decades-long insurgencies.

"The government needs to solve Rakhine issue effectively or it will largely impact on the country's peace process," said Tu Ja.

Nearly 600,000 Rohingya have fled to Bangladesh in the wake of a bloody Myanmar military crackdown described by the United Nations as ethnic cleansing.

He also believes the Rakhine Rohingya crisis has been slowing efforts to settle decades-old ethnic minority conflicts in Myanmar.

"The government needs to prioritize peace talks as it is important to end ethnic conflicts," Kwe Htoo Win said. 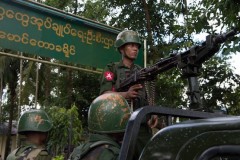 He added that this needed to be done in parallel with addressing the situation in Rakhine State.

Handling of the crisis in northern Rakhine by the government and military brought back memories of what the KNU and Karen people had experienced over many years, he said.

Long-running conflicts in Myanmar's smaller states with large Christian populations — such as Chin, Karen, and Kayah — forced hundreds of thousands of people across the Thai border into refugee camps.

A six-year-old resumption of conflict that had been dormant for 17 years resulted in more than 100,000 people being forced into camps for internally displaced people in Kachin and northern Shan states.

Suu Kyi's father, General Aung San, who led the country to independence from Britain, had reached an agreement regarding self-autonomy and federalism with the Kachin, Shan and Chin ethnic groups in 1947, but failed to secure deals with several other ethnic groups.

Soon afterwards, Aung San was assassinated and the agreement was never fulfilled.

In the aftermath, many ethnic groups again took up arms against the central government.