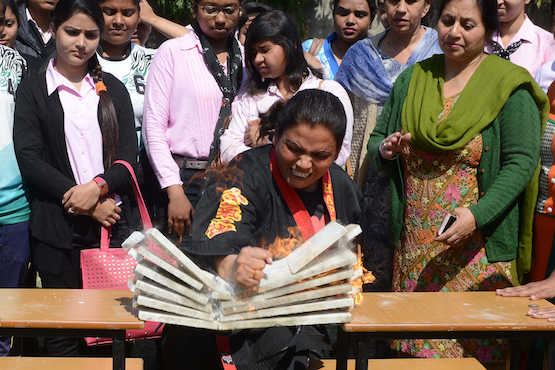 A female karate exponent demonstrates her skills on the eve of International Women's Day in Amritsar, India, on March 7. (Photo by Narinder Nanu/AFP)

At 25, citizens are free to make their choices in life, but Hadiya, a woman from India's most literate state, Kerala, found herself separated from her husband and confined to her parents' home for months against her wishes on the orders of the top court in the southern state.

Hadiya's mistake was to abandon her family's Hindu faith for Islam and marry a Muslim without her parents' consent. Her father, K.M. Ashokan, had told the court that his daughter, whom he called Akhila, had been lured by Islamic activists to change her religion and that he feared she may soon be taken to another country to be part of a terrorist gang.

What raised eyebrows was the Kerala High Court's disapproval of Hadiya's marriage on the grounds that it was solemnized without the knowledge and consent of her parents.

A stoic Hadiya stood her ground before the Supreme Court, which recently restored her marriage and declared that it was none of the court's business to intervene in a marriage between two adults.

The entire premise of the case — that a 24-year-old woman couldn't marry or decide her religion — was built on the concept of patriarchy. And the judge's remarks during the trial — "as per the Indian tradition, the custody of an unmarried daughter is with her parents until she is properly married off" —  reflected the deep-set biases against Indian women.

Hadiya's case comes at a time when a new ecosystem dominated by hard-line Hindu elements is rising across India.

To be fair to him, Prime Minister Narendra Modi has stood for women's empowerment but most of his supporters and followers are fanatics not committed to the idea of equality and freedom for women.

Last year, one such person, Yogi Adityanath, became chief minister of Uttar Pradesh and his government's first step was to send the police after young couples. Called "Romeo squads," these special teams rounded up men seen in the company of women in parks, malls and outside colleges in cities and small towns of India's most populated state, made them do sit-ups and humiliated the couples in public.

Adityanath said this was meant to check harassment of girls by boys, a phenomenon called "eve teasing." However, his real motive was to install fear in the minds of young women who had started mingling with boys and a few marrying in defiance of caste and religious barriers.

Women in his northern state are facing serious problems that need government intervention rather than curbing their basic freedom of movement. The state recorded 38,947 rapes in 2016, more than 100 every day and the highest number in India. About 53 percent of women in the state are anemic, the highest percentage in the country.

Modi's pro-Hindu Bharatiya Janata Party (BJP) and affiliate groups tried to take control of Indian campuses and, again, women became their first targets. Gurmeher Kaur, a 20-year-old student at a prestigious college in New Delhi, was hounded out of the city by trolls on social media for her advocacy of peace between India and Pakistan.

Kaur's army officer father died fighting terrorists in Kashmir when she was 2 years old. After making a video appealing for no war between India and Pakistan, she was threatened with rape and death.

The ruling BJP's ideology is rooted in Rashtriya Swayamsevak Sangh (RSS), an all-male organization avowed to make India a Hindu hegemony. Its members worship Bharat Mata (Mother Goddess India) and yet believe men and women can only have specific and different roles. Leader Mohan Bhagwat has outlined the rule for a good society: Women should look after homes while men become the breadwinners.

No wonder some RSS men who are ministers in Modi's cabinet have openly spoken in a way that is pure misogyny. One minister, Satyapal Singh, asked men at a public rally in an Uttar Pradesh town: "How many of you would marry a woman who came in jeans for her wedding."

Raghunandan Sharma, another BJP functionary and a lawmaker from Madhya Pradesh, offered a unique formula to check the growing crimes against women: Girls should not wear jeans or use mobile phones before getting married.

In another BJP-ruled state, Haryana Chief Minister M.L. Khattar has refused to ban kangaroo courts called khap panchayats that order the lynching of young men and women who break caste and religious barriers to marry.

Within the BJP, the role of women is even more limited; its sole female chief minister, Vasundhara Raje in Rajasthan, is facing hostility from seniors, while another one in Gujarat was removed. Many would link Raje's prominence in the party to her royal family background.

Sushma Swaraj and Nirmala Sitharaman do figure among the top ministers of Modi's cabinet, yet their roles are curtailed by the prime minister's dominating presence. Foreign Minister Swaraj is more visible on her Twitter handle as Modi goes globetrotting to build relationships with other countries. Sithraman is more often seen playing the roles of BJP spokesperson and election manager than taking crucial decisions as defense minister.

The government seems to be using women as mere vote-winning blocks by not introducing blanket legislation to empower women against abandonment, arbitrary divorce and male domination.

It was a clever move by the government to ban triple talaq (oral divorce) common among Sunni Muslims. The idea was to win women's votes and not necessarily to solve all problems that Muslim women face. Seven decades after India gained political freedom, millions of Indian women are confined to their gender roles in kitchens and farms. Should Indian patriarchy decide when they should be free or will emancipated women in India find a way?

Aasha Khosa is an independent journalist who writes on Kashmir, gender and social issues.