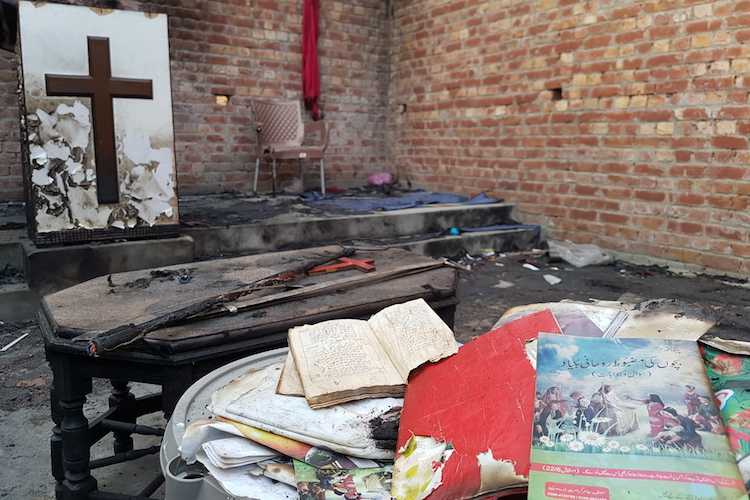 A burnt Bible and other books at Gospel of Jesus Mission Church in Shahdara on April 16 after the unexplained fire. (Photo by Kamran Chaudhry)

A mysterious fire has damaged a Protestant church in a Pakistani town rocked by blasphemy protests two months ago.

Gospel of Jesus Mission Church is in a narrow street of a Christian basti (slum) in Shahdara town near Lahore, the capital of Punjab province.

The remains of burnt holy books, an offering bag and a chimta (music tongs) lay near the half-melted pulpit of the building, which has been under construction for more than three years.

Pastor Yousaf Aziz John filed a police complaint on April 15 at Shahdara police station, where a peace agreement between local clerics and Christian leaders was signed on Feb. 21 after an angry mob protested against Patras Masih, 18, who allegedly shared an anti-Islam photo on Facebook.

"We are a poor community and had been building the House of God with donations. We strongly believe that unknown miscreants have committed this evil. The losses amount to about 50,000 rupees (US$430). We demand an immediate remedy for the wounds of the whole Christian community," Pastor John told ucanews.com.

Police sub-inspector Rana Amir visited the site on April 16 and recorded statements from the community.

"The forensics department collected samples the same night. A report will be released this week revealing the cause of the fire. A security plan has been chalked for the 14 churches of Shahdara registered with the police station, but no forces are appointed for unregistered ones," he said.

Churches not registered with the Auqaf Department, which supervises important religious monuments and holy places, are deemed illegal by the government. In January, Khyber Pakhtunkhwa province closed but later reopened six home-based churches in Abbottabad.

Police have warned that they will not take any responsibility for any mishaps at prayer gatherings in residential areas. Home-based churches are common in Christian ghettos and their surroundings. Youhanabad, the largest Christian settlement in Pakistan, has more than 100 unregistered churches usually comprising a single room or a hall.

Khalid Shahzad, a Catholic activist based in Shahdara, slammed police for filing the Shahdara case as an accidental fire.

"Only the sections regarding vandalism and loss of property have been nominated in the first information police report. They deliberately skipped the blasphemy clause 295 which deals with acts intended to insult religion or religious beliefs of others. This loophole will help in bail for the accused if arrested," he said.

"The community was already living in fear after the recent blasphemy case in an adjoining village."

Amid increasing religious violence in Pakistan, two Christian men were shot dead in Quetta on April 15 as they left a church.

The Pakistani bishops' National Commission for Justice and Peace has condemned recurring attacks on religious minorities.

"It is the responsibility of the state to provide protection and security to its citizens. Christians are the most peaceful community in Pakistan and they have been under attack for no reason. The government should immediately take serious notice of this dangerous trend emerging and properly inquire all these incidents and formulate an independent inquiry commission," the commission said in an April 16 press release.

"These incidents show the inability of the national action plan to counter extremism and intolerance. Government must ensure that the perpetrators of these heinous crimes are brought to justice. Law enforcement agencies should take effective steps against religious persecution and militant outfits should not be allowed to operate in the country."