Party's increased control of religions in China could backfire Chinese Catholics at a Mass for the Feast of the Ascension at the underground Zhongxin Bridge Catholic Church, Tianjin. (Photo by AFP)

The atheist Communist Party has recently made clear its latest strategy for controlling religious groups across China. Beijing has started to assign certificates detailing the secular name, religious name, national ID card number and a new, unique faith number to Buddhist monks across the country.

By the end of this year, authorities will require the same of Catholic and Taoist priests, state-run broadcaster CCTV and nationalist tabloid Global Times reported earlier this month. Protestantism and Islam — the other two of China's five officially recognized religions — will surely face orders to follow suit in the near future.

Those religious personnel without certificates will be barred from engaging in religious activities, according to the State Administration for Religious Affairs, the government body that manages religious activity across China.

Beijing is clearly taking yet another major step to control religion as President Xi Jinping's rule becomes ever more regimented and intolerant of perceived threats to the political status quo.

But the latest blueprint for China's pacification and domination is likely to represent a miscalculation by the all-powerful Communist Party. Here's why.

In the nearly three years since Xi became president in March 2013, burqas have been banned in Xinjiang. Security forces have shut down "illegal madrassas" arrested their operators while "saving" minors inside who are not allowed in mosques across this vast region of deserts and snow-capped mountains. Recently, Beijing has spoken of banning loosely defined "terrorist clothing" in Xinjiang.

More than 1,500 church crosses have been removed in prosperous Zhejiang province and now party officials are showing up to Mass to quell dissent against this campaign. And in Tibet monks and nuns complain authorities have banned images of their spiritual leader the Dalai Lama while forcing monasteries and nunneries to instead display images of Xi and other party leaders.

Frustrations among China's hundreds of millions of religious believers appear to be running higher than at any time since Chairman Mao's death in 1976.

The Chinese Communist Party is restricting, harassing, torturing and in some cases even killing members of these religious groups in the name of preserving the party and maintaining stability. 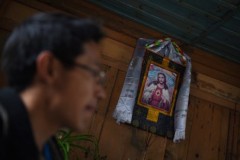 But in always trying to control, the party risks creating a self-fulfilling prophecy in which religious groups begin to find ways to undermine Beijing's tight grip.

The nationalistic state-run tabloid Global Times last week made a rare admission of this problem in a surprisingly even-handed assessment of the new religious certification scheme.

"The certificate will become a tool for government officials to easily veto those religious practitioners they don't favor," said Liu Peng, director of the Pushi Institute for Social Sciences in Beijing, one of a number of criticisms aired in the article.

Priests within China's state-backed Catholic Church have already told ucanews.com that instead of seeking to obtain the necessary certification, they may instead go underground. This is telling. What this new scheme aims to do is further divide and conquer, it makes all religious personnel jump through yet more hoops to find favor with authorities to practice faith in an increasingly state-controlled environment.

But for many this will be the tipping point: previously compliant priests, monks and nuns will instead choose to operate outside of the party-controlled system. This is the opposite of the scheme's intended aim from Beijing's point of view.

The certificate scheme therefore represents another decisive move that splits the church and other faiths depending on whether their adherents tow the party line or not, and it creates ever more faithful that fall into the latter category. They are pushed underground.

Given the Communist Party almost never uses laissez-faire and gentle persuasion when it can instead exert force, there is little to suggest that Beijing will back down on this ill-considered scheme. By its very nature, the party simply doesn't consider views counter to its own, and its knee-jerk reaction is always to use force over finesse. No wonder China's Communist Party remains loathed by the majority of China's 300 million faithful, democrats in Hong Kong, an increasing majority in Taiwan and much of the civilized world. No wonder that after 67 years of rule on the Chinese mainland, the party remains paranoid and apparently so weak that it continues to censor almost every view counter to its own. No wonder the party remains so petrified of people of faith.

That the already obvious failings of this new religious certification scheme have been aired in the state media remains the only cause for optimism.

Otherwise, everything points to yet another major confrontation between the party and China's 300 million religious believers. And the result can only be more harm caused to these faithful — and to the ever-fragile party itself.