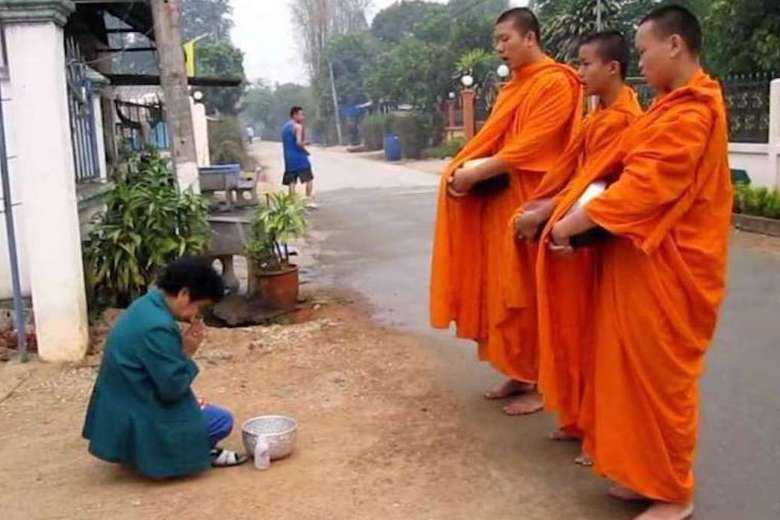 Seven Buddhist monks have been expelled from the ranks of the clergy after they were found to be partying in the northern Thai city of Chiang Mai.

The monks, four of whom were abbots of monasteries, were reported to police by locals as they were in breach of a Covid-19 regulation that prohibits any large gathering.

The senior Buddhist clergymen were dining on roasted pork and drinking beer during a party on Aug. 29 held at a private residence in the company of a layman.

Monks are prohibited by their monastic vows from eating anytime between noon and dawn; nor are they permitted to imbibe alcoholic beverages and other intoxicants.

In addition to being defrocked by the monastic chief of Chiang Mai, the seven monks have been given a suspended sentence of 15 days in jail and fined 10,000 baht (US$309) by a local court for breaking strict Covid-19 regulations.

The incident has come on the heels of several other news items implicating monks in various crimes and misdemeanors in the predominantly Buddhist nation where monks are widely held in high esteem.

Last month a Buddhist monk who ran a meditation retreat in the central province of Phitsanulok shot and killed a layman during a heated argument.

In other recent cases Buddhist monks have been accused of engaging in the sexual exploitation of minors, illicit affairs with women and the trafficking of narcotics.

In one salacious case, a young monk living in a monastery on northeastern Thailand was reported to dress up as a woman to go out at night.

Several senior monks have also been arrested for allegedly embezzling their monasteries’ funds.

“Buddhism is in its ugliest form everywhere these days — monks with drugs, monks with minor wives, monks with unusual amounts of money in the process of laundering for third parties … monks abusing children sexually,” one commenter observed wryly.

At the same time, however, other Buddhist monks in Thailand have acquitted themselves by joining frontline workers in tending to the sick and dying during a raging Covid-19 outbreak in the country, which has seen 1.2 million people get infected and nearly 12,000 die, most of them over the past few months.

“There are a lot of Thais who are still ignored by the public health system,” said Phra Mahapromphong, 33, deputy abbot of Wat Suthi Wararam, a riverside Buddhist monastery in Bangkok.

The monk has been one of many other Buddhist monastics who have been paying visits to poor families around Bangkok, bringing food and medical supplies.

“Monks are able to live because we rely on people’s donations,” Phra Mahapromphong told the Bangkok Post. “So it’s time for us to give back to the people. At the very least, we can encourage them to keep fighting.”

Wat Suthi Wararam and many other monasteries have allowed their premises to be turned into isolation centers for Covid-19 patients with monks assisting doctors and nurses in administering to the sick.