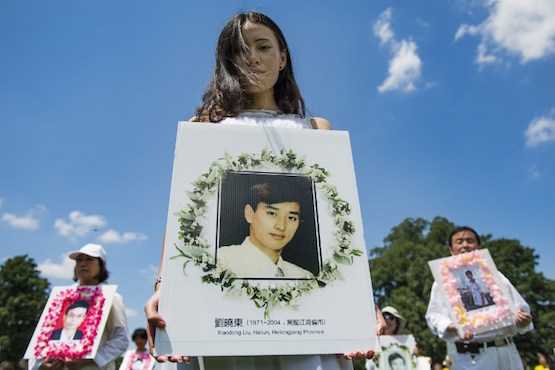 A file image taken in 2014 of a Falun Gong practitioner holding a memorial picture during a march in Washington D.C. calling for an end to the persecution of the practice in China. (Photo AFP)

The Chinese Communist Party's anti-corruption watchdog is going to start a new round of inspections into 32 party departments and government ministries, including the United Front Work Department and a secretive security agency created to oversee the persecution of Falun Gong.

Wang Qishan, the head of the Central Commission for Discipline Inspection and one of the seven members of the elite Politburo's standing committee, announced the latest round of inspections in a meeting June 22.

The disciplinary commission is tasked with enforcing internal rules and regulations and combating corruption in the Party. The United Front Work Department (UFWD) is a Party organ under the central committee, which liaises with non-party individuals or organizations both inside and outside China that are useful and supportive to the Party's rule.

"The UFWD holds a lot of resources since it have to reach out to unite people in all areas, from national level to towns or villages. It is very easy to find corruption in such a department," Ching Cheong, a Hong Kong-based political commentator, told ucanews.com.

Religious groups are one of those targeted to "unite" around the Party. As part of this, religious leaders are often given political titles, such as being delegates of the National People's Congress or members of the Chinese People's Political Consultative Conference.

"The inspection covers all levels of the United Front Work Department. The religious sector will likely be affected but it won't be the only one as there are many other social sectors," said Ching, a Protestant.

Ching said that the religious sector is more affected by the results of the National Conference of Religious Work, which was held in April because it is more directly related.

Bao Lu, a Catholic commentator in China, expects the outcome of the inspection of the UFWD will be the same as the one done on State Administration for Religious Affairs, which is all about control.

"Besides strengthening centralized management, the inspection will also clean out a remaining clique in the UFWD, following the probe of the former department's director Ling Jihua in 2014," Bao said.

"The Beidaihe meeting is upcoming and President Xi may be in danger if he does not clean out his opponents before the meeting," he said.

The Beidaihe meeting is held annually and provides an opportunity for the Party's leadership, past and present, to meet for closed-door discussions that are thought to set the tone for major domestic issues.

Another unit under inspection is the so-called "610 Office," named as such because it was established on June 10, 1999 to oversee the persecution of Falun Gong practitioners.

Falun Gong is a type of Qigong with Buddhist school teachings, which emerged from Jilin province in 1992. The practice rapidly gained nation-wide popularity until the then Party leader Jiang Zemin ordered its suppression in 1999.

Ching believes that the inspection of the 610 Office is another case of Xi striking out against one of his political enemies.

"It is not related to a normal religious group as we all know the office was established by former Chinese president Jiang Zemin to crackdown on the Falun Gong," Ching explained.

According to Amnesty International, "tens of thousands of Falun Gong practitioners have been arbitrarily detained" since the government launched a crackdown on the practice in 1999.

Accusations that the ruling communists have harvested organs from imprisoned Falun Gong practitioners recently gained traction after a U.S. House Resolution June 13 condemned the atrocity while a report released June 22 in Washington D.C. gave further details of the scale of forced organ harvesting believed to be occurring in China.