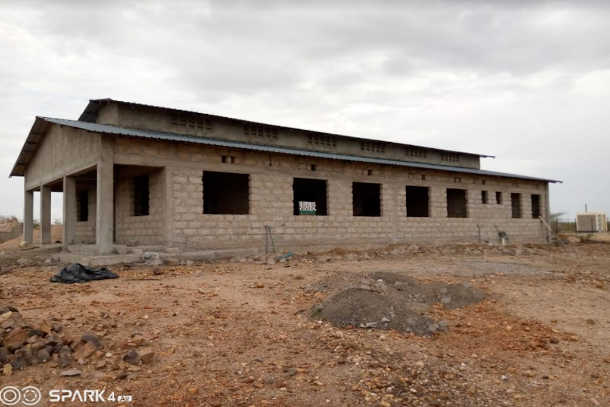 The latest project supported by Ballineaspaig Parish is a maternity unit in Turkwel Parish.

Twinning relationships or partnerships between parishes in Ireland and in African countries are a growing form of modern missionary endeavor at a time when the number of Irish missionaries serving in Africa and the global south is declining. One such partnership is that between Ballineaspaig Parish (often called Dennehy’s Cross Parish) in Cork City and Turkwel Parish in the Diocese of Lodwar in northern Kenya.

The link between the two parishes started in 2005 through prayer for each other and through financial support to enable the digging of wells, construction of irrigation schemes, and the building and equipping of a health clinic in Turkwel. The parish priest in Turkwel at the time was a Cork man, Father Oliver Noonan SMA.

The latest project supported by Ballineaspaig Parish is the building of a maternity unit adjacent to the health clinic to serve the Kalemunyang catchment area in Turkwel Parish that comprises 500 square miles.

Sister Pascalia, a member of the Kenyan Sisters of Mary of Kakamega, has worked in Lorugum Health Centre for the past 17 years. “It has been a challenge conducting deliveries without a proper maternity ward,” she told the Faith in Action Group in Bishopstown. “Such a ward would be the realization of my dreams for the families here.”

A quotation of €90,000 to build the ward seemed like a huge amount, but the Faith in Action Group were fully confident that their parishioners would not be found wanting. Swinging into action, they produced and distributed a special information leaflet knowing that once people understood how great was the need, and how such a facility would change, improve or save the lives of so many mothers and babies, they would be generous in their response.

How right they were. After four weeks, they had raised 50 percent of their target amount, and two months later they had exceeded it. To add to their great success, an application to Electric Aid for a grant of €10,000 was successful, bringing the total to almost €105,000. This allowed sufficient funds to include the installation of solar power. That had not been part of the original plan but the Faith in Action Group felt it was important from both an environmental perspective and avoidance of the problem of electricity being cut off which is a feature in many African countries.

The construction work is now in its final stages and equipping the ward will commence soon. Sister Pascalia described the fundraising success and the erection of the maternity ward as “a miracle.”

This type of support to communities in very poor parishes in the global south is a real practical example of solidarity and care grounded in Christian values and beliefs. As the millennium year drew to a close, the Faith in Action Group in Ballineaspaig Parish felt that it would be an opportune time to create partnership links with a parish in a developing country.

Turkwel is in a remote and underdeveloped part of northern Kenya with a harsh landscape and difficult climate. Many of the communities are pastoralists who make their living by herding goats, cattle and camels over a wide terrain. Their lifestyles are very simple and lack many of the necessities of life, such as clean water, health and medical care, access to education and opportunities to live a secure and settled life.

The partnership program between the two parishes has seen great improvements in facilities in Turkwel over the last 15 years. Shallow wells have been installed in many parts of this large parish to provide the people with a secure and clean supply of drinking water. These wells have also been connected to irrigation schemes to guarantee the growth of crops for a healthy diet for the people in the area. Self-help and sustainability are at the heart of the program.

“We had nine different irrigation schemes in the parish which were set up as cooperative movements” says Father Oliver Noonan. “During my time there we facilitated a rejuvenation of some of the schemes. The Faith in Action Group were one of long term committed partners that we had over the years — something which is characteristic of twinning as opposed to the usual once-of donor agencies.”

The parishioners of Ballineaspaig contributed very significant funds to build two clinics to provide health care for people in the Kalemunyang and Lorugum regions. A difficulty that the clinics encountered was the inadequate supply of medicines to treat the many different illnesses that afflicted these communities. Father Noonan and local people set up a medicine purchasing scheme and employed a qualified pharmacist to ensure that the right medicines were purchased and supplied to the people of Turkwel through Lorugum Health Centre.

This has been a very effective project as the people contribute a small amount to the cost of the medicines and because of the financial support from the people of Ballineaspaig Parish it has been possible to set up mobile clinics to provide medicines and health care for even remoter parts of Turkwel Parish. Twenty bicycles and five motorbikes were purchased for health workers and nutritionists to visit the most outlying regions. This is typical of how missionaries have provided such essential services for many decades.

As part of health care, a nutrition/feeding program for young mothers and children was set up at each clinic. Food supply can be very haphazard due to drought, crop failures, pests and diseases that affect their local crops and wild plants that supply food. The financial support from Ballineaspaig Parish has given the people the means to prioritize the needs of the youngest and most vulnerable members of their communities and ensure a brighter future for them all.

Importance of education in development

Education is key in the development of any community and the people of Turkwel identified at an early stage that they needed to expand the small schools in the parish and to provide clean water supplies for the pupils. They installed solar panels in each school so that it could act as a community center for the local people when classes ended each day.  Integrated development was a key focus of the development program and classrooms have also been used as bases for the mobile health clinics that visit each community on a weekly basis.

“The program is ongoing and receives constant support from the parishioners of Ballineaspaig Parish,” says Clare McCutcheon of the Faith in Action Group. “A key part of the success of this development program has been the ability of the parishioners in Ballineaspaig Parish to source other financial support in Ireland for the programme in Kenya. Substantial funds have been provided by Electric Aid and by SHARP, which is funded by donations from over 550 staff of the Health Service Executive in counties Cork and Kerry.”

This is a beautiful wooden crucifix now located near the altar in Ballineaspaig Church. It is the work of an African woodcarver who was commissioned by the parish in 2013 through Father Noonan. The crucifix provided a commission for an artist in Kenya who is a war refugee from Mozambique, and it is a visual expression of faith and solidarity between the two linked parishes.

“As this inter-parish partnership evolves in mutually beneficial ways, prayers are offered in each parish for the parishioners of the other, and a dual language prayer bookmark has been produced and made available to the parishioners in both parishes as a reminder of their solidarity and friendship,” says Rosalie Moloney, chairperson of the Faith in Action Group.

Father Noonan is now based in Nairobi where he is country director of the Shalom Centre for Conflict Resolution and Reconciliation, which was founded in 2009 by his fellow missionary Father Patrick Devine SMA. He still retains a keen interest in the progress of the partnership.

This partnership is one of several between parishes in Ireland and in African countries, with the longest established one being the Westport-Aror Partnership (Kenya) initiated in 1982.

Matt Moran is a writer living in Cork in the Republic of Ireland. Author of “The Legacy of Irish Missionaries Lives On,” his forthcoming book will be “The Theology of Integral Human Development” dealing with the role of faith in international development and public affairs. He has written extensively on parish and town twinning).