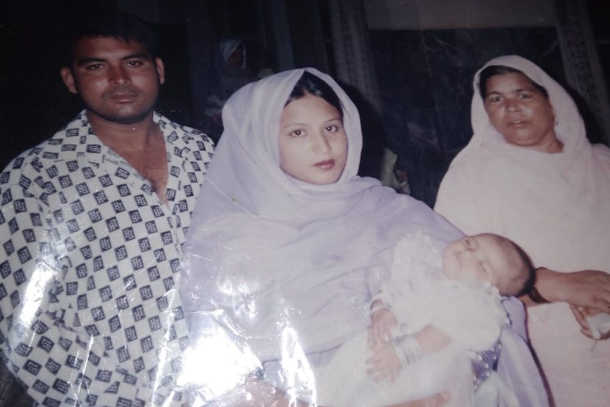 Huma Younus with her parents Younus and Nagina at her baptism in 2005. (Photo supplied)

The parents of a teenage Pakistani Catholic girl forced into marrying a Muslim man are angry after another delay to legal proceedings seeking to annul the marriage.

Huma Younus, 14, a resident of Karachi’s Zia Colony, was allegedly abducted from her home last October, taken to neighboring Punjab province, converted to Islam and forced to marry.

Her parents filed a petition with Sindh High Court seeking annulment of the marriage under the Child Marriage Restraint Act.

The matter was heard on Feb. 3 when two judges caused controversy by observing that the marriage between Huma and her alleged abductor, Abdul Jabbar, would be considered valid under Islamic Sharia law if she had already had her first menstrual cycle.

The court gave the police more time to determine Huma’s age and adjourned the hearing until March 4. But her parents Younus and Nagina were disappointed when Huma was not presented to the court as they had expected.

Nagina said Huma’s absence was “a violation against the orders of the honorable court” and again appealed to the Sindh government and the court to help recover her daughter and punish her kidnappers.

Asad Butt, chairman of the Human Rights Commission of Pakistan, said minorities in Pakistan are under pressure and no one is ready to hear their cry for justice.

“It is an alarming situation for us all when we see the violation of the Child Marriage Act in the province where it was promulgated. How is it possible that the province cannot keep order with its own laws?” he asked.

“It is the responsibility of government to provide safety and security to its minorities. The cases of Huma and other underage marriages of girls are seen as a crime and all those who have gone against the law must be punished according to the law.”

Nagina told the court that Akhtar Hussain, the police investigation officer, knows where her daughter is but is fully supporting the abductors.

The court ordered Hussain to present Huma to the court at its next hearing on March 29 so that a medical examination of her age can be conducted.

Activists who attended the March 4 hearing demanded that the government, police and judiciary help Huma’s family.

Dr. Sabir Michael said the principle of a fair trial had not been followed in Huma’s case. He cited the case of Mehak Kumari, an underage Hindu girl who was forcefully converted and married to a Muslim man. She had told judges during her hearing that she wanted to return to her parents.

“Therefore, I assume that in the case of Huma the abductor might be feeling fear that if they present her in front of the honorable court, she might also show her desire to go with her parents,” he said.

Huma’s parents have provided documentary evidence including a Catholic baptismal certificate and testimony from her school purporting to show she is 14 years old, born on May 22, 2005.

“We were in a state of shock when the judges did not consider our evidence and referred to Sharia law to justify the marriage,” mother Nagina said after the Feb. 3 hearing.