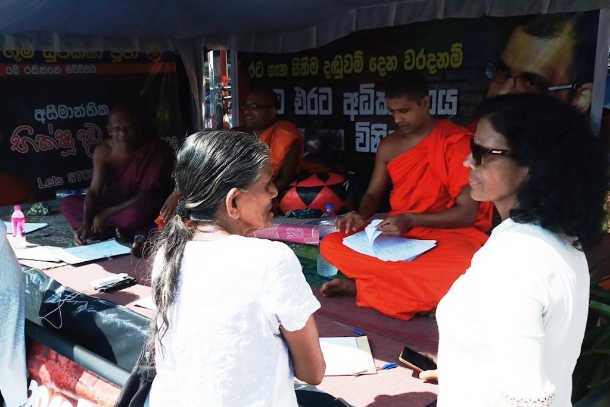 Buddhist monks put up posters in Colombo on June 18, 2018, seeking the release of the Venerable Galagoda Aththe Gnanasara Thera from prison. (Photo by Quintus Colombage/ucanews.com)

Buddhist monks in Sri Lanka are clamoring for the release of the Ven. Galagoda Aththe Gnanasara Thera while others denounce the calls for a presidential pardon, which they say would be a travesty of justice.

The senior monk serves as secretary general of Bodu Bala Sena (BBS), a Sinhalese Buddhist nationalist organization blamed for the recent spike in attacks against the country's Muslim and Christian minorities.

He is serving a six-year prison sentence after he was arrested early last year on charges of contempt of court and the disruption of court proceedings.

This stemmed from his threatening behavior toward Sandya Eknaligoda, the wife of missing journalist Prageeth Eknaligoda, on court premises while she was pursuing a habeas corpus case over the disappearance of her husband.

The monk was found guilty of criminal intimidation because of his threatening behavior towards Eknaligoda at a court in 2016.

Her battle to find out the truth behind what happened to her spouse brought her into conflict with Gnanasara Thera, who confronted her at the court complex and accused her of supporting Tamil Tiger rebels and maligning the nation's war heroes.

Eknaligoda has since urged President Maithripala Sirisena, the attorney general, and the justice minister to reject the latest entreaties to set the monk free. She has also drawn human rights activists to her cause.

On Feb. 2, a number of civil society organizations and over 200 activists signed a petition demanding the president not release the firebrand monk.

"It would be an injustice to the aggrieved party and the magistrate if he is released on bail," Eknaligoda said. The Venerable Galagoda Aththe Gnanasara Thera leads the hard-line Bodu Bala Sena (BBS), or Buddhist Power Force. He was imprisoned for six years in 2018 for contempt of court. (ucanews.com photo)

Last year, she claimed to have been on the receiving end of death threats by supporters of the monk after he was charged for heckling her and threatening her safety.

She said she was subjected to harassment and intimidation on a daily basis on social media platforms like Facebook after he was sentenced.

"According to the provisions laid out in the Assistance to and Protection of Victims of Crimes and Witnesses Act in 2015, I, as the aggrieved party and main witness in my husband's case, must be informed of any move to grant him a pardon," she said.

"He leveled accusations at me in court, so I am the victim here," she added. "I deserve justice."

She has been fighting for years to get to the bottom of what happened to her husband, a cartoonist, political analyst and journalist who was abducted in January 2010, just two days before the presidential election.

He had hitherto published several articles that were critical of former president Mahinda Rajapaksa, which in the hard-line Buddhist monk's eyes made him an enemy of the state.

When Eknaligoda took up his case, which has implicated military intelligence officials, Gnanasara Thera responded by denouncing her, as well as her lawyers and the presiding judge, which landed him behind bars.

But his supporters have refused to accept this as a fair punishment and were outraged this month to learn that the monk's name was not on this year's list of 545 inmates who would be receiving presidential pardons. The monks' supporters launched a signature-gathering campaign in January calling for his release. They also pressed President Maithripala Sirisena to issue an official pardon for the monk. (Photo by Quintus Colombage/ucanews.com)

Meanwhile, the Venerable Passaramulle Pagnajothi Thero, a coordinator for the BBS, said President Sirisena promised earlier that he would be released.

But Eknaligoda, who was awarded the U.S. Secretary of State's International Women Courage Award in 2017, has challenged this by sending letters to three of the most powerful men in the country.

Gnanasara Thera maintains close ties with Wirathu, another extremist monk based in Myanmar.

The petitioners on Feb. 2 also implored the president to expedite investigations into the various crimes Gnanasara Thera has allegedly committed.

These include his purported involvement in the "Aluthgama incident" in 2004. At least three Muslims were killed and hundreds of Muslim-owned businesses were torched in overnight clashes with hardline Buddhists in this coastal town in Kalutara District of Western Province.

Gnanasara Thera has been cast as one of the ringleaders. His detractors are demanding he be prosecuted in court for this according to the rule of law. However they do not endorse the use of the death penalty.

"We urge Buddhists to come forward to support the release of Gnanasara Thera, who has sacrificed his life for the nation and for our religion," said the Ven. Badalkubure Ariyashantha Thera, one of the organizers behind the petition campaign to set him free.

Lawyers for Democracy said ceding to such demands would set a worrying precedent in Sri Lanka's legal system, effectively giving religious leaders carte blanche to act as they wish regardless of the laws of the land.

"Gnanasara Thera has a long history of fueling ethnic and religious tension in this country," the group of lawyers said in a statement dated Jan. 30.

"We have no doubt his release would have a seriously adverse impact on the Ekneligoda disappearance case, and all other pending cases of political significance, particularly those involving the military," the statement read.