Papuans on June 15 in Abepura, Jayapura protest against the sending of a team formed by the central government to resolve human rights issues in Papua. (Photo by Benny Mawel)

Over a thousand people, including seminarians, have staged a rally in Jayapura, the provincial capital of Papua in Indonesia to protest the central government’s human rights policies.

A host of abuses occurred during the first year of Indonesian President Joko "Jokowi" Widodo’s administration, including the arrest, torture and murder of at least 700 civilians, according to a report by the Commission for Missing Persons and Victims of Violence.

"The root of the problem in Papua isn’t the shooting of one or two persons," Bazooka Logo, who organized the rally, told ucanews.com. "Its the 1969 Act of Free Choice."

The Act of Free Choice — ­ which asserts that the indigenous population of Western New Guinea relinquished sovereignty to become part of Indonesia — emerged without a clear legal basis, he claimed.

"The agreement is invalid and a gross human rights violation," said Logo, who is also spokesman for the pro-independence, National Committee for West Papua.

"This violation is the basis of all human rights violations happening in Papua." Papuans on June 15 in Abepura, Jayapura rally to protest against a team tasked with collecting data about human rights issues in Papua. (Photo by Benny Mawel) 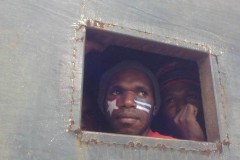 The central government formed a task force last month to resolve the issue in Papua. The team has been tasked with collecting data and submitting a report to the president. They hope to resolve 12 human rights cases by the end of this year, cooperating with the police and the National Commission on Human Rights.

"The Papuan people reject the team formed by Jakarta," said Logo. "We will open our arms only if they address the history and the Act of Free Choice."

Christianus Dogopia, a seminarian from the Fajar Timur School of Philosophy and Theology in Abepura, Jayapura claimed that the team would have a political agenda.

"Jakarta formed the team after the human rights abuses in Papua became topics of international discussion," he told ucanews.com.

"The state knows they violate human rights. But it seems they aren’t willing to [fully] resolve the problems…. So it’s fine if the Papuan people reject them."

Yadinus Mabel, who heads the youth group from the Synod of the Evangelical Church in Indonesia, was equally pessimistic. "The state can’t judge the state," he said.