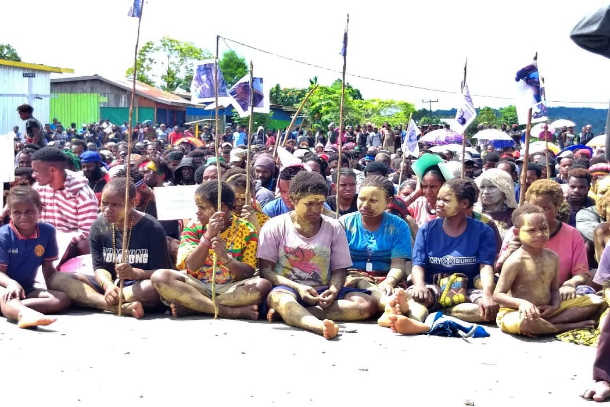 People stage a peaceful protest on July 27 to demand an investigation into the July 19 killings by security forces of a father and son in Papua’s Nduga district. Rights activist Veronica Koman says she is being persecuted for helping people such as these fight for justice. (Photo supplied)

Papuans living in Australia and at home are digging in their pockets to raise funds for Veronica Koman, a human rights activist wanted by the Indonesian government for supporting their fight for justice.

Koman, who is living in Sydney, was recently told by the Indonesian authorities to return 773.8 million rupiah (US$53,000) in scholarship money given to her to study in Australia.

The demand on Aug. 11 came from the Indonesian Finance Ministry’s Education Fund Management Institute, which claimed she had not complied with a provision of having to return to Indonesia at the end of her study period.

The move is being seen by observers as a way of trying force the activist to return to Indonesia where she could face charges related to unrest in Papua last year.

Knowing Koman will not be able to meet such a demand, Papuans at home and in Australia are attempting to raise funds for her.

“We are West Papuans living in Australia, calling for our friends to support Veronica Koman, an Indonesian human rights lawyer,” the fundraising committee wrote on chuffed.org, a non-profit charity.

“Many West Papuans admire her advocacy work on West Papua issues, including her defense of West Papuan clients charged with treason for peacefully demanding our right to self-determination,” the committee said.

"We won’t let Veronica pay the cost for her human rights advocacy in Papua. Your donations will be used to take the financial punishment," the committee added.

However, fundraising events for Koman in several parts of Papua were broken up by security forces, another rights activist said.

Emanuel Gobay, director of the Papua Legal Aid Institute, said several events in Jayapura and Nabire this week were stopped by local police.

“I am very concerned about the motives behind stopping these events,” he told UCA News.

Gobay said the demand for the return of the money is a violation of her constitutional right to have her human rights protected by the state.

Koman denied the government’s claim she had not returned home to Indonesia in September 2018 after completing her master’s degree in law at the Australian National University.

"The Indonesian government’s financial punishment is an effort to stop me from doing advocacy on Papuan human rights," she said in a statement on Aug. 11.

Koman said that while she was in Indonesia she joined the Jayapura-based Human Rights Advocates Association for Papua and went to Switzerland to lobby for Papuan rights at the United Nations in March 2019 and returned to Indonesia afterward.

In September, she was accused of instigating violence by tweeting videos of unrest in several cities after protests broke out on Aug. 19, 2019, in Papua and West Papua in response to racism directed at Papuan students in Surabaya, East Java.