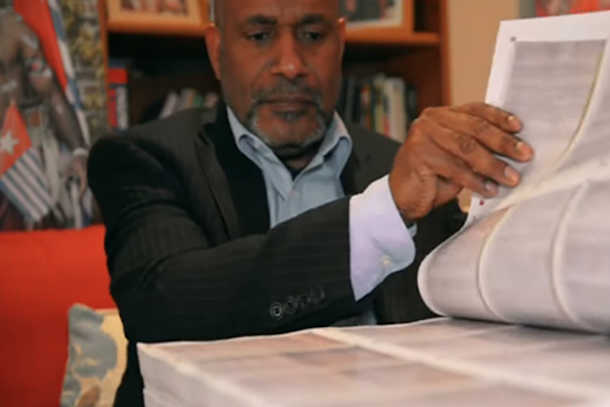 Benny Wenda shows the petition signed by 1.8 million Papuans. The petition calls for a referendum on independence. (Photo supplied)

Pro-separatists in Indonesia’s West Papua province have handed a petition, signed by 1.8 million people to the U.N. High Commissioner for Human Rights, calling for an independence referendum.

The petition also called on the U.N. to send a fact-finding mission to the region to investigate allegations of human rights abuses.

“Submission of the petition was facilitated by Vanuatu,” Wenda said.

Vanuatu was one of several Pacific countries that helped a number of Papuan political groups, including the ULMWP, apply for membership of the Melanesian Spearhead Group (MSG), an intergovernmental organization, in 2014.

Wenda said the petition represented “the voice of the Papuan people who reject the much-criticized U.N.-sponsored referendum of 1969.”

Many Papuans believe the referendum that facilitated Indonesia’s takeover of Papua was rigged.

Only a small number of local people were allowed to take part in the independence referendum, namely 1,025 men and women who were selected by the Indonesian military.

Wenda said he also spoke to Bachelet about recent violence in the province’s Nduga district where at least 20 employees of a state-owned construction firm were shot dead by separatists in December.

The violence saw more than a thousand Papuan villagers flee into forests to escaped fighting between soldiers and separatists following the killings.

One signatory, Dominikus Surabut, denied reports that people were coerced into signing the petition.

“There was no coercion. This is how we express our absolute freedom,” the local tribal leader told ucanews.com, urging Jakarta to recognize the Papuan people’s right to self-determination.

Presidential Chief of Staff Moeldoko told reporters that he believed the U.N. will ignore the petition since it “respects Indonesia’s sovereignty.”

Father Laurensius Eddy Doga from the Secretariat of the Franciscans’ Justice, Peace and Integrity of Creation in Papua, called on Jakarta to display some courage and ask the Papuan people what they truly want.

“This is the key. Papuan people no longer believe in [the Indonesian government] since human rights violations continue to occur,” he said.