Papuan students break away from a line of police and military blocking them during a rally in front of the army's headquarters in Jakarta on Aug. 22. Riots and demonstrations brought several cities in Indonesia's eastern province of Papua to a standstill during protests againat the earlier arrests and racist insults aimed at Papuan students in Surabaya. (Photo by Bay Ismoyo/AFP)

Under the iron thumb of Indonesia’s autocrat Suharto, the media was forced to apply a ban on reporting of SARA issues — suku, agama, ras, antar golongan: ethnicity, religion, race or intergroup affiliation — over fears that any mention of animosity between such groups could spread like wildfire.

That rule was partly forgotten in the years immediately after Suharto’s fall as people divided by race and religion engaged in bitter and often brutal conflicts in Maluku and Central Sulawesi and indigenous Dayaks in Kalimantan slaughtered hundreds of migrants from Madura Island just off East Java.

More recent governments have moved to reinstate the SARA rule, although today the job of keeping the lid on inflammatory reporting is made far more difficult by the ubiquity of social media. Recent riots in West Papua and Papua provinces were sparked by racist jibes thrown at a group of Papuan students in Surabaya, the nation’s second city, prompting three days of rioting.

While the Indonesian authorities rushed reinforcements to the area, they appear to have acted cautiously in handling the crowds of mainly young men who gathered on street corners in the West Papua cities of Sorong, Manokwari and Fakfak.

Rioting also occurred in a number of centers in neighboring Papua province, while rallies rejecting racism were held in Jakarta, West Java, Medan in North Sumatra and Bali.

The separatist Morning Star flag was visible at a rally in Yahukimo in the Papua highlands. That compounds the damage for Indonesia: not only has the country’s reputation suffered because of the racism incident but the protest rallies have been hijacked by the separatist movement, winning more support internationally for its cause.

Up to six protesters and one soldier were killed in clashes across West Papua and Papua provinces on Aug. 28, according to media reports. A source at one protest in Deiyai Regency said police had fired lived rounds into a crowd of protesters outside the regency offices. Six people were killed and two seriously injured, the source said.

Papuans are no strangers to discrimination but they do not have a monopoly on it. Twenty years ago, cosmopolitan residents of Jakarta would equate members of the Batak community of North Sumatra with the fearsome, occasionally murderous drivers of the minibuses that often engaged in races across the city. Since then the Batak community has made more of a name for itself as high-profile lawyers, diluting the discrimination.

Many people count their fingers after shaking hands with an Ambonese, a group known to this day for their association with crime groups and protection rackets. Coming from the Kei Islands in Maluku almost immediately stamps you as a gangster. The country’s small ethnic Chinese community has suffered discrimination for at least three centuries.

Every country has its regional stereotypes and jealousies. Indonesia has nothing but. With more than 200 ethnic groups, it’s difficult at times to define what is an Indonesian. Yet today virtually every citizen is fluent in at least two languages — their local language and Bahasa Indonesia, the national language that does much to unite the republic. 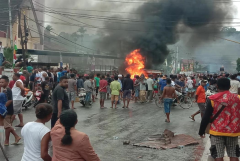 So effective was the language in uniting the country that it is still an official language in Timor Leste, now celebrating its 20th anniversary of the referendum in which its residents chose to quit Indonesia.

Papuans speak Bahasa too, so why are they not accepted in the way that so many other different ethnicities are? This is a question Indonesians have to ask themselves. Why, for instance, is it that in their own land Papuans are so often relegated to the bottom of the economic ladder? Why, in markets around the two provinces, is trade dominated by independent migrants from South Sulawesi and transmigrants from Java?

The government, particularly under President Joko Widodo, has stressed the importance of development as a means of enriching the Papuan people. Projects include the massive undertaking to build the Trans-Papua Highway that runs across the mountainous interior and the Palapa Ring internet backbone project, which will theoretically empower formerly remote communities from one end of the country to the other.

While plenty of Papuan leaders agreed these projects were positive, others were skeptical. Many saw the highway opening up traditional lands for penetration by illegal timber getters and traders keen to sell Papuans what they don’t need.

An attack last December on a highway construction gang in Nduga regency saw 19 workers killed by a band of separatists, inevitably slowing the project as Jakarta ordered more security. Safety issues have also delayed completion of the eastern section of the Palapa Ring.

Some Papuans say they don’t want this sort of development. They want to be left alone, allowed just to live the way they want to live. While few traditional communities anywhere in the world are able to stop the spread of globalized trade and cultures, in Papua the resistance is colored by a “them and us” attitude that separates indigenous Papuans and the rest.

Indonesian governments find it hard to deal with such sentimental considerations, especially when their soldiers are regularly picked off with bullets from the bands of separatists that roam the highlands. And while President Widodo may be genuine about wanting a new dialogue on what should happen in Papua, the armed forces and the police often appear to have far more leverage on the ground, while Papua’s own elites are often busy siphoning off the generous cash transfers made to the provinces.

The situation in Papua and West Papua is increasingly reminiscent of Aceh during the nearly three-decade separatist struggle that ended with an agreement on wide-ranging autonomy in 2005. The former Free Aceh Movement (GAM) used to refer to other Indonesians as "Javanese," implicitly stating that the country represented little more than a Javanese empire.

In the wake of the Helsinki peace agreement, the Acehnese increasingly follow their own agenda. A strict Islamic culture has been imposed; Jakarta has tried to dissuade the authorities in Aceh from public canings of people deemed to have sinned against morality codes, but to no avail. The GAM flag still occasionally surfaces at rallies and Aceh’s membership of the greater Indonesian entity appears increasingly fragile.

Papua might be on a similar path. But because of migration, Papuans are increasingly a minority in their own land. Poor education in many areas — often because teachers have failed to turn up — limits potential. Meanwhile the stronghold of immigrant groups is such that meaningful work is often restricted to members of the same group.

Getting other Indonesians to stop calling Papuans “monkeys” would be a start, but the road to a peaceful outcome for Papua within Indonesia is going to be a long and complex one.