Sofia Wawon and the St. Anthony's Foundation empower other people with the virus to live a normal fruitful life 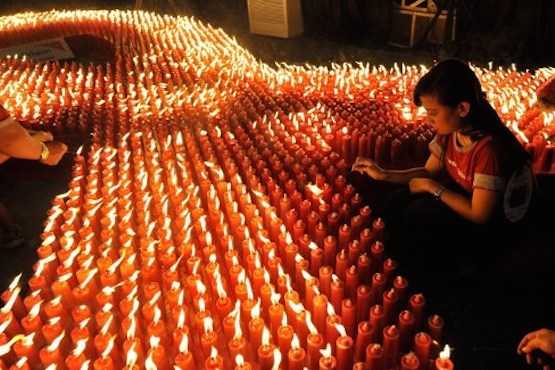 An Indonesian volunteer lights candles during a ceremony to mark World AIDS Day in Jakarta in this file photo. (Photo by AFP)

Being diagnosed with HIV 12 years ago changed the course of life for Sofia Wawon, 29, a housewife from Merauke, Papua.

It began when she went with her husband for a voluntary medical examination run by a local Catholic hospital.

Since 1992 stories about HIV/AIDS had spread across the district. Wawon, who was married at the relatively young age of 16, had little knowledge of the  disease and was afraid.

"The results were shocking," Wawon recalls. Both her husband and one year-old daughter were also HIV positive. Tragically her daughter died a week later, while her husband died two years after that.

After her husband died she visited the St. Anthony Foundation in Merauke for another test, hoping for a miracle.

"But the results were unchanged," she said.

However her motivation to live and hope became stronger through the support of the St. Anthony Foundation, which provided spiritual guidance and regular meetings with other HIV positive people seeking treatment and empowerment.

"They helped us to be open to our families, neighbors, and to socialize with the community," said Wawon.

Since 2006 she has taken antiretroviral drugs and has had routine health checks. She also receives mental health training, spiritual direction, and empowers other people confronted with HIV/AIDS through the foundation’s programs and activities.

"Spreading information about HIV can save many lives," Wawon said.

In recognition of her active participation, she was made a staff member at the foundation in 2014, with the responsibility to assist 45 HIV patients. Sofia Wawon says that her illness has transformed her to be instrument of God's love to others. (ucanews.com photo by Eman Riberu)

Wawon has regained her self-confidence and is active in discussion forums about HIV/AIDS, talking at schools, on the radio, and in other public forums.

"This is part of my gratitude for God’s intervention and who has allowed to me to live up till today," she said.

"Stigma and discrimination exist because of a lack of information," she said.

St. Anthony’s chair Leonardus Mahuze said the group, established in 1979 by Father Daniel Siga and Catholic layman Ende Fofied, started taking care of HIV/AIDS patients when the epidemic broke out in Merauke in 1992.

At the time there was no institution or government agency to take care of people with HIV/AIDS. In 1995 St. Anthony’s established a health care unit to tackle the virus and prevent it spreading. Since then it has handled more than 500 cases.

"In the early days most people died," Mahuze said. He cited the lack of facilities and the advanced stages of the illness. But with financial support from overseas donors and more recently from the local government, St. Anthony’s has been able to sustain its services and preventive programs.

The chairman of the St. Anthony Foundation, Leonardus Mahuze, says the group treats and trains people affected by HIV to be able to stand on their feet and educate others. (ucanews.com photo by Eman Riberu)

However Mahuze stressed that HIV/AIDS in Merauke is like an iceberg, spreading silently beneath the surface and if not addressed, it could explode.

"A huge number of people move in and out of Merauke. If not handled properly, HIV cases could go up again," he said.

St. Anthony’s is doing its best to halt the disease through awareness campaigns, socialization programs and empowering people with HIV to stand up and campaign against the spread of HIV.

Tuban Sriyono, a representative of the AIDS Prevention Commission in Merauke, agrees on the need to avoid complacency. "Cases may decline but keep in mind this does not mean there are no cases left," Sriyono said.

From 1992-2016 the AIDS Prevention Commission recorded 1,901 cases of HIV/AIDS in Merauke alone. While all social groups in Merauke are affected, housewives followed by sex workers show the highest rates of infection.

This year the AIDS Prevention Commission has established a prevention unit for schools, government agencies, private companies, organizations, and communities. It will also boost its campaign for use of condoms and reproductive health education.

Doctor Inge Selvia, head of Reproductive Health of Merauke district hospital, said there is a need to pay serious attention to pregnant mothers living with HIV.

"HIV positive pregnant women should regularly take antiretroviral drugs," she said, to minimize the transmission of the virus to the baby.